As noted in the Force Pool listing found to the left of this page, I will be using vehicles from two sources: Irishserb's 15mm Vehicles and QRF.
My project will be based loosely along Generation Kill lines, meaning U.S. Marines riding around in Humvees with the occasional LAV-25 for support. Therefore I needed to find some Humvees with .50 cal machineguns and Mark 19 grenade launchers to replicate the vehicles used in the Generation Kill series. My gaming friend Brian O'Leary has a history of making true scale 15mm vehicles, and when I found out he had exactly what I was looking for, I immediately placed an order.
Brian's Humvees are extremely well done, cast cleanly in resin, and are very cost effective. Each Humvee retails for $5.00, so I bought four (two with MGs and two with GLs). Brian only charged me $2.00 for shipping (I live about two hours away from him) and mailed the order very promptly. Here is a picture of a GL armed Humvee right out of the pack. 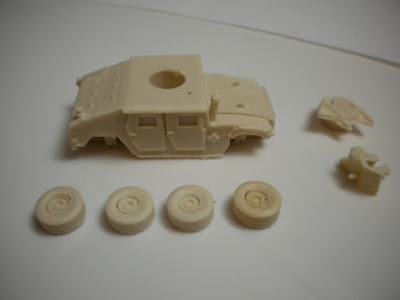 As you can see, the vehicle is well detailed. Brian builds a master and then makes a mould to create the production models from. And he offers his Humvees in a variety of configurations. I highly recommend his service.
From fellow Ambush Alley forum member RJ I was able to pick up a nicely painted QRF LAV-25. Since the Marines in the Recon Battalion came across the LAVs from time to time, I thought having one (or two) around for support might be a good thing. The QRF vehicles are cast in metal and have a heftier price tag than Brian's resin offerings, but since Brian does not (yet) make an LAV, and RJ gave me a sweet deal, I really shouldn't complain. Plus the QRF LAV is nicely done. The LAV retails for around the $7.50 mark. 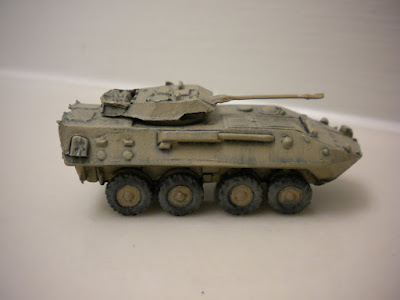 Next time, pics of the miniatures I will be using.
Solid Copy by Darryl R. Smith at 17:40