My recent talk about the Falklands War forced me, yes, forced me to order five books on the conflict and pull from the miniatures bin the MJ Figures Falklands War packs I have had in the bin for quite some time.  Now the packs are on the dining room table, ready for clean up and mounting on bases.  Of the packs I have (see The Falklands War Project page for a list) two are vehicles, the ubiquitous Scorpion/Sabre/Scimitar and the (mostly) non-factor Panhard armored car.  While most of my modern gaming is focused on the infantry, having a vehicle or two bounding about or being available via random die rolls as reinforcements can add a bit of variety and different challenges for players to overcome.  However, my initial plan for getting back into the Falklands War was strictly Royal Marines vs. Argentinian regulars and special forces (as my initial orders from MJ Figures show); it was month later I decided to buy one of every pack that MJ offers to take pictures and write reviews.  I am finally getting to that point I guess, with this post about the first of the two MJ vehicles in their Falklands range.

The Panhard AML 90 is a lightly armored 4 x 4 reconnaissance vehicle with a big punch.  The Argentine army deployed over a dozen of these French designed armored cars to the Falklands.  They were engaged at the Battle of Wireless Ridge against the Scorpions and Scimitars of the Blues and Royals.  Wanting to have some random support options for my Argentine forces as well as being able to review this model for the MJ Figures website, I just had to pick up one! 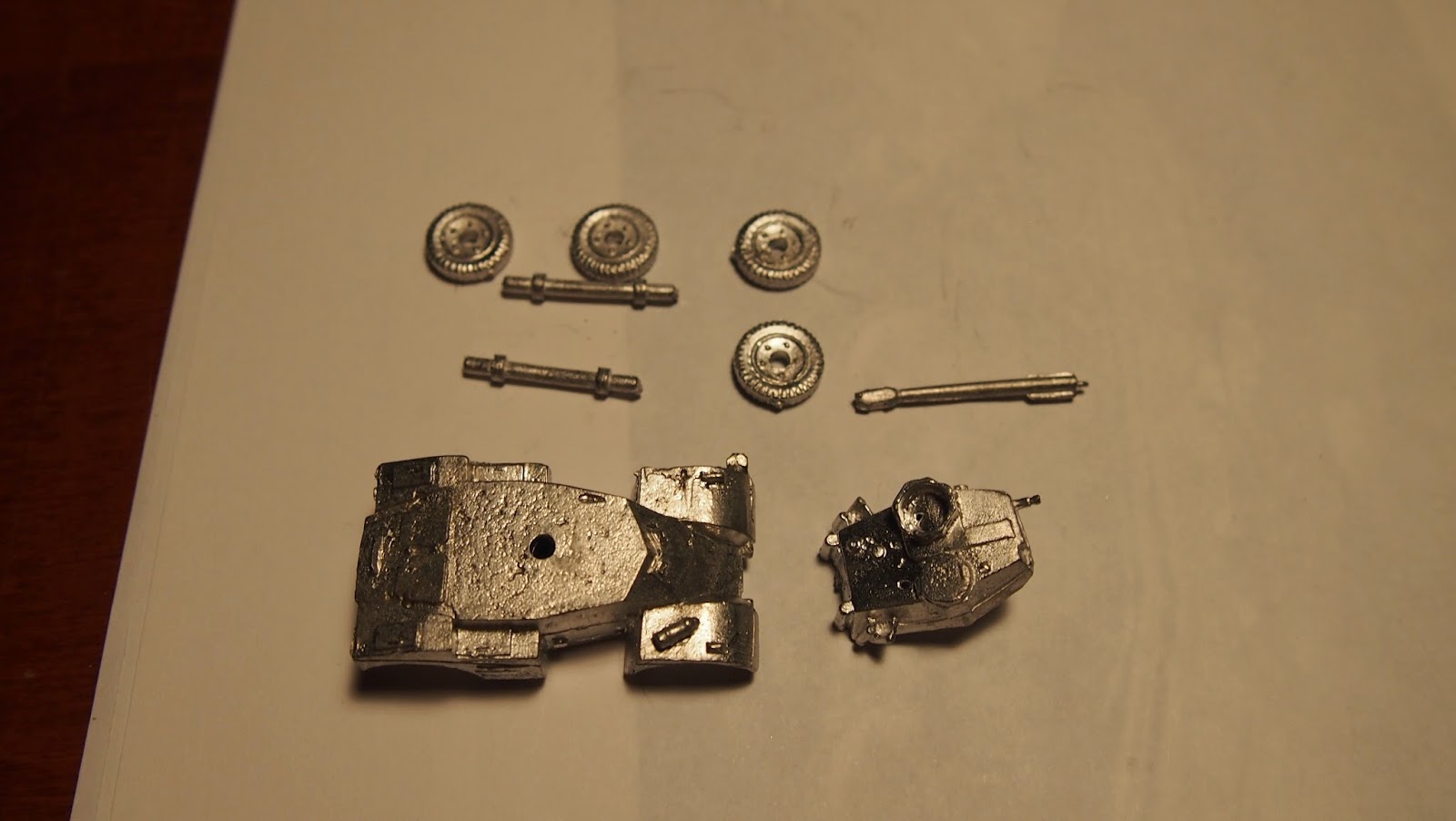 The MJ Figures Panhard comes in nine pieces (four tires, two axles, one hull, one turret, and one gun).   Actually, it must come with ten pieces, but apparently I am missing the hatch cover.  Assembly is very simple.  Glue the tires to the axles, the axles to the bottom of the hull (there are cutouts to place the axles into), glue the gun to the turret, and place the turret on the hull.  The quality of the overall kit is decent, a few pieces of metal to cut off, a bit of filing, and some trimming of the axles once the wheels are in place.  Detail is good, with enough raised detail to take a drybrush but not so much to make the detail look out of proportion.

All in all, this is a nice kit that takes very little effort to put together and looks great when completed.  Scale-wise it may be a bit on the small side as the MJ Figures infantry are closer to 18mm, but the AML 90 blends well enough on the tabletop.  Rush over to the MJ Figures website and pick one (or ten) up today!
Solid Copy by Darryl R. Smith at 07:52

Email ThisBlogThis!Share to TwitterShare to FacebookShare to Pinterest
Mentioned in the Dispatches: Falklands War, MJ Figures