Wow, there certainly are a lot of options when it comes to 1/285th and 1/300th scale aircraft for the Korean War, much more than I had initially expected.  That is a grand thing, having a half dozen or so companies to choose from (that variety being the spice of life thing).  It also has allowed me to decide that while these two scales are close in size and decently compatible on the table top, I can go with strictly 1/285th aircraft so that my aircraft match perfectly, as opposed to just closely.

Why else am I able to focus on just 1/285th aircraft? There are several reasons.  First, the variety of U.S. and Soviet aircraft covered:

Next, the quality of those companies making 1/285th is on the higher end of the quality spectrum of the various companies in both 1/285th and 1/300th.  The three companies listed above blend very well together.

Add in ease of ordering.  All of the above companies have online webshops and can also often be found on eBay, Noble Knight Games, and other online discounters.

And, looking over the Check Your 6! Korean War booklet, the above list of aircraft cover nearly every scenario in the book.

So, I am going to push forward with the 1/285th aircraft that are available.  To that end I have removed the links for the 1/300th scale companies from both the right sidebar and the Air War page as, for me, they are no longer needed.

Rules, however, are still a bit of a bane to my existence.  Now, Check Your 6! seems to play decently enough, but I have only experienced two games in a span of a decade, and running numerous aircraft isn't quite what I want to do.  Most of the CY6 scenarios also call for quite a bit of aircraft, and even splitting the load among multiple players still means controlling several miniatures on the gaming table.  On the other hand CY6 is also what my gaming buddies are using, so there are opportunities for continued exposure and experience. 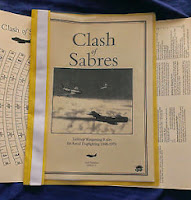 I have given Clash of Sabres the most cursory of read-throughs, but it appears to be a decently written set of rules, and one that a player is more focused on controlling a single aircraft or at most a pair of aircraft.  Where CY6 uses hexes for movement with each aircraft having certain maneuvers it can perform based on its historical performance, CoS uses turn templates, and the template used is based on airspeed, not individual aircraft capabilities.
Solid Copy by Darryl R. Smith at 11:27