So I have these nice 15mm DEVGRU figures I bought painted from Jason at Micropanzer, and I need to get them on the gaming table to go after some bad men, and soon.  It has been far too long since I have pulled out the 15mm terrain and gamed some Force on Force/Ambush Alley.  But something is missing from my DEVGRU collection, and that is transport.  I have been looking at the Evil Bear Wargames Panther, a command and control vehicle for the British Army, but one that has a cool look and can hold a fire team, plus it has a GPMG or an HMG for support.  But it is British and not really ideal for an American spec ops unit, right?

I posted on The Wargames Website (one of my new homes for gaming chatter) about vehicles suitable for the DEVGRU, and of course I overlooked the obvious...the DEVGRU are a Navy ops unit, so would either use amphibious vehicles or helicopters for transport.  But those Evil Bear Panthers are so cool and I want a couple! 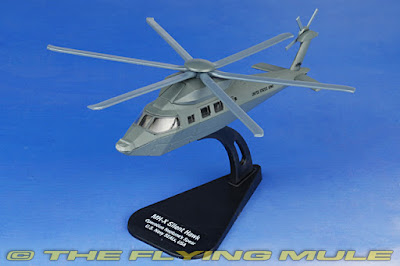 Okay, so it is my gaming table and I can field whatever I like, right?  Why not do a little of both, have ground transport if I so desire for non-DEVGRU actions (still using the DEVGRU figures), and also have correct helicopter transport when using the figs as true DEVGRU?  Looks like I can.  Italeri make an MH-X Silent Hawk in 1/100th scale, just like Seal Team Six used for the raid on Bin Laden.  High tech stealth, holds a couple of fire teams, perfect!  It is die cast, ready to use, and decently priced.  Perhaps a change of the stand to a more realistic flight stand and BAM, there solves the DEVGRU's transportation woes!  All that is left is to go place a couple of orders!