A Banana Marine in a China War

Some months ago I was able to purchase a custom made gunboat brokered by The Virtual Armchair General and built by the prolific Richard Houston.  Normally Mr. Houston builds boats in 25mm, but I wanted a 15mm version of the San Pablo of The Sand Pebbles fame and Pat at TVAG was able to convince Mr. Houston to do this request for me.  More on this later in this post.

For years I have tinkered with a Banana Wars or China Sailor project, but like many of my projects, I buy books, maybe even figures, scoop up rules, create a Yahoo group or cheap free website, and then not much more than that as my interest waxes then wanes and waxes towards another project.

For some years I have also owned a selection of the Eureka Miniatures 15mm Wake Island Marines and sailors, with a thought of doing some sort of Wake Island scenario.  Some books and the figures were as far as I proceeded with that dream.  But, in looking at the figures, I think they would serve well in both a Banana War or China setting.  Of course the Eureka Marines are wearing helmets and not the campaign hat, but in the later periods of the Banana Wars I believe the helmet was being used, albeit possibly not often due to its weight and unsuitability for the hot and humid climates.  But it was certainly being used in China and it looks darn cool with Springfield, Lewis Gun, Thompson, and  Browning Automatic Rifle toting Eureka Miniatures!

Okay, so now that I have a gunboat and Americans, I need to find some sort of opposing force(s).  Easy enough to field some Asiatics as Eureka happens to make World War II Chinese that I think are close enough for government work, but what if I want to move into the Caribbean or Central America?  I am not having much luck finding many suitable options, other than perhaps some Cubans from the Spanish-American War period.  Perhaps the Eureka World War II Filipinos could also be used.  I do like to have all my figures for any project from one company.  So, between the Eureka Chinese and Filipinos, I should be able to have small actions in China or Central America.

Rules?  Easy enough I think.  I recently uploaded a set of rules to Google Drive (the link can be found at the upper right of this blog) called Yanks Up the Yangtze, written by Cannon Fodder Miniatures's Greg Blake, who was kind enough to allow me to tinker with them and offer them as a free set to anyone who wanted a copy.  Several years ago I reformatted them to bring about a cleaner appearance, changed the ranges to inches, and added a card set to aid in play.

Terrain?  Ahhh, there's a problem.  I have this aforementioned gunboat, a real beauty, which is just dying to make an appearance on the game table.  I would have to come up with some sort of river feature for my Terrain Guy tiles to use the gunboat.  And as The Terrain Guy has closed shop, I do not know what I can do to add some sort of river edge to my terrain tile set up.  I have a blue sea mat, but I really should have a brown one for China.  Also, no manufacturer makes Chinese buildings in 15mm.  I just keep finding it amazing with a few ranges of 15mm Boxer Rebellion figures on the market that no one has made Chinese buildings to go with them.  I can stretch it a bit and use Japanese buildings, like the excellent offerings from Oshiro Model Terrain, but players are too smart for that weak substitution attempt, yes?  There are also companies making Vietnam buildings but again, not correct for China, but some actually might be useful for the Caribbean. 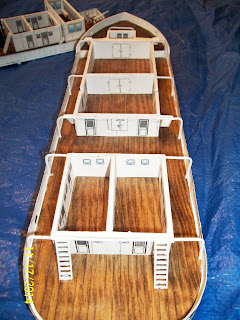 Anyway, back to the boat.  It alone could create the gaming construct needed for a scenario.  The decks lift off allowing figures to be placed throughout the miniature, so boarding actions could be fought.  But that would also mean that I need some sort of Chinese conveyance in order for the Chinese to approach and attempt to board the boat.  Small launches?  A junk or two?  Who makes 15mm Chinese junks?  Perhaps a scenario could start with a Chinese force already onboard, and they have to clear each area.  So many possibilities I guess, but before I get that far I need to get the American mounted and painted, and then start purchasing the opposing forces.

Like most of my other projects, this one will see future posts over the future months as I try to get my gaming focus narrowed a bit and start to see some projects actually hit the table.
Solid Copy by Darryl R. Smith at 13:46