As I live in a condo, I really do not have a space where I can spray-prime my figures.  We have an enclosed balcony, but the spray causes a bit of sediment once it settles so that is not a practice I can keep utilizing and expect my wife to be pleased.  There has been several mentions of similar living arrangements on The Miniatures Page, and seemingly the most common solution is using a brush on primer.  Far more time consuming, but much safer for my marital health.

This past weekend I was out with my wife and we stopped by a Michael's craft store so I picked up some Liquidtex Gesso, in this case the white artists series as I did not want to have any graininess that some reported using the basic version.  I really wanted gray as I like a darker primer yet one that still allows me to see the details of the figure, but the choices at my location were black and white.  Upon coming home I grabbed a couple of test figures (in this case a Ravenstar Studios 15mm Horrid, that was cast in a bright blue resin, and a metal 15mm Khurasan colonial marine based seemingly on a popular science-fiction movie series).  If the Gesso didn't live up to its billing, these two figures would not be a huge loss.

Here are the figures within moments of painting. 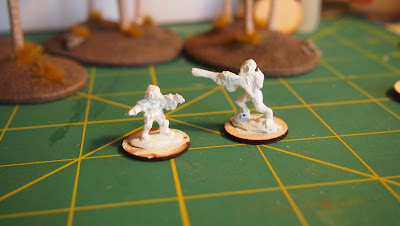 And here they are a day and a half later. 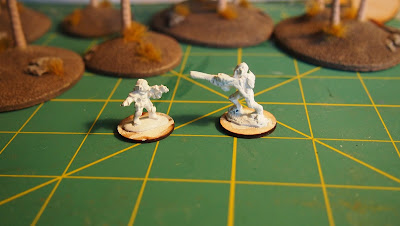 Overall, I am fairly pleased with the results.  While priming figures with a brush is slow work as compared to priming via a spray, the Gesso seems to cover well.  I do not think I put as much on as some others, as the detail difference is not that noticeable between my two pictures, but upon drying the details were a bit more prominent.  I have since primed several more of the Horrids, and when they dry I will start applying a basecoat and see how the Gesso holds the paint.

If you need any further convincing that Gesso might be a great way to prime figures without spraying, here is a video showing how well the Gesso forms to the figure.