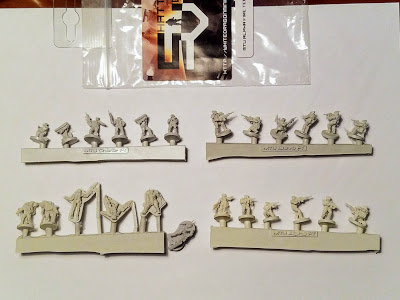 A couple of piccies and some thoughts on these figures that actually arrived several days ago.  That is the first thought...from order date to arrival was just a week and a half, excellent shipping time from the U.K. to the States.

Casting is...interesting.  As you can tell by the pictures, the figures are cast by fireteam with a lot of resin being used for the base piece.  I am wondering if White Dragon could cut costs by reducing the amount of extra resin being used for that piece.  While it might be neat to see the name of the unit on that bar, it is very unnecessary and about half the resin used is going to be tossed in the bin. 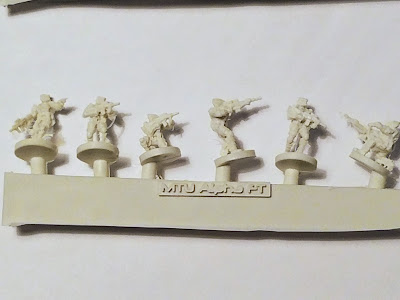 The figures are excellent, some of the most realistic proportions I have seen, particularly when it comes to the weapons.  That also might be a downfall as the rifle barrels are thin, and one will have to be careful when removing the figures from the base piece so as to avoid weapon breakage.  I am hoping that once removed from the base that a coat of Gesso will help protect the weapons, but as an added precaution perhaps only game with these figures with fellows you know will be more careful in use.

There is a nice round base on each figure, but the base is only 12mm in diameter, so a bit small (for me at least) to use as is, so these figures will be mounted onto some Litko bases.

There is some flash on some of the figures, but as these are resin the flash is easily removed with a flick of the X-ACTO knife.

Standing figures measure about 16mm from sole to eye, and with their correct proportions I would rate them a 16L on the Barrett Scale.
Solid Copy by Darryl R. Smith at 06:32