Recently I had found a mention about a company who makes pre-painted 15mm buildings for World War II on another blog.  I am always on the lookout for buildings suitable for the Middle East, especially those that are pre-painted as I simply do not have the time to paint as I once did in my younger days.  Deimos Design Studio (hereafter DDS) has a small range of North African buildings in their WWII line that I thought would be perfect for a small village setting in present day Iraq.  Having purchased most of the Miniature Building Authority (hereafter MBA) buildings for the Middle East (small range but large price) I was hoping to find additional buildings for my Ambush Alley Generation Kill project.  With the apparent demise of Crescent Root Studios* my options for pre-painted buildings were becoming limited.  Luckily DDS fills a void and meets some requirements for my Ambush Alley gaming, those requirements being a) cheaper than MBA, b) pre-painted, and c) lift-off roofs on all buildings.
I placed my order for four buildings with DDS on July 26th using PayPal to handle the payment portion.  I had my buildings waiting for me after a short trip on July 31st, a very commendable turnaround time.  The four buildings I ordered were ABR103 (2 Arab buildings), ABR102 (Arabic 2-story building), and ABR106 (Arabic 2-story building B).  They all arrived nicely packaged via the U.S. Post Office.  The four buildings totaled $60.00. 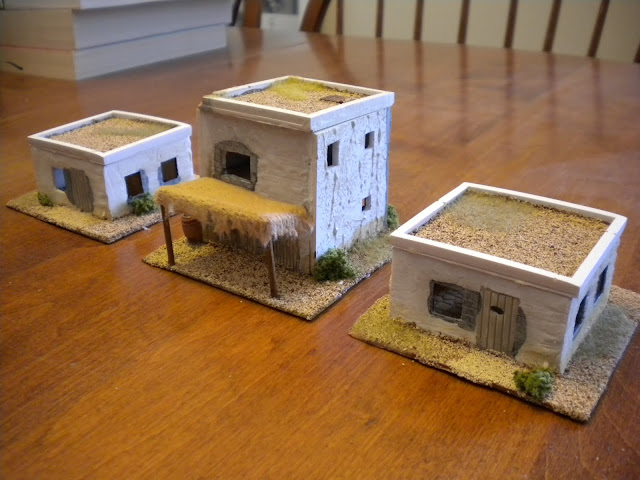 The buildings are constructed from plastic (probably sheet styrene) and given a coating to simulate mud/stucco.  All have the required lift-off roof.  ABR102 has a floor piece that comes out allowing access to the ground floor (and a cloth overhang), while ABR106 has two separate stories.  All come finished on a terrained base that has some flocking to add a bit of color. 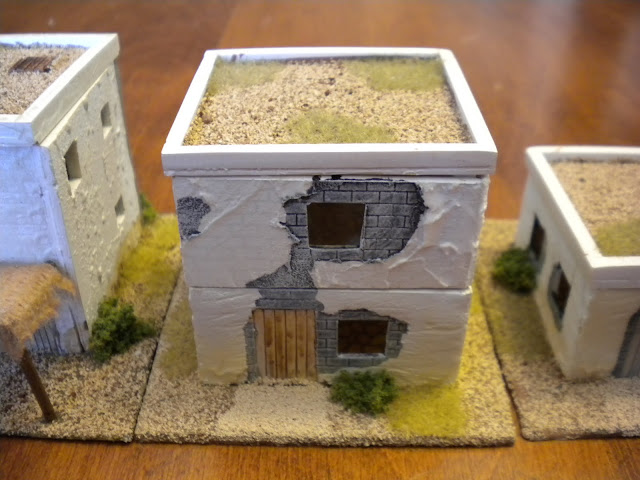 These buildings will prove to be very functional within my Ambush Alley project.  Floor access via lift-off roofs will allow figures to be placed within, giving the "bad guys" cover and concealment, and will make building clearing a bit more realistic.
DDG also produces an open air market, a market building, a mosque, and a sheep farm.  Nine different buildings within this range without having to use any duplicates will be plenty for the time being, and if I want to add more buildings to the project, a few more of the AR103 packs will fill in nicely.  They will also do custom work (perhaps I will have them create a block or two of buildings suitable for small towns).
Overall I am quite pleased with the quality, service, and price of the DDS buildings, so much so that I have sold my MBA ones!
* - Several months ago I had emailed CRS to check the availability of their buildings.  I received a reply that they were on a "hiatus" of sorts and that they would email me once they were taking orders again.  After a few months, they did indeed email me.  I replied within a few hours that I wanted to place an order, to which I received a reply that they had already taken enough orders and would not be taking more for awhile.  I thought that to be a strange practice.
Solid Copy by Darryl R. Smith at 14:36