It has been FAR too long since I have posted to this blog.  My real life committments do prohibit my ability to do much in my gaming life in the weeks leading up to the holidays.  Hoping now that the New Year is upon us I can start being a little more active with the blog and gaming in general.
I have been having a bit of trouble trying to get the folks at Deimos Design Studio to reply to my inquiry in having a special building made.  After an intial burst of contact months ago, they seem to have fallen a bit off the map.  I was hoping to have a block of buildings made, maybe three of four buildings all linked together.  Perhaps, like me, their real lives got in the way a bit and they have just been a bit busy.  Time for another dispatch to see what the status might be.  I've had great service from them for the two orders I have placed, so I still have high hopes!  UPDATE - Okay, I just went to their URL, only to find it has gone POOF.  Looks like another homegrown company has bit the dust.  So glad I was able to buy their buildings when I did, so saddened to see them disappear without as much as a goodbye.  Guess that explains their lack of response!
On another note, I am happy to see that one of my favorite manufacturers has released a 15mm minaret!  GameCraft Miniatures announced that they now have added a 13.25" tall minaret to their line of 15mm Middle Eastern buildings.  Consisting of four parts (three resin and one acrylic tube) this piece will make an impressive addition to my small village.  Here is the picture from the GameCraft site: 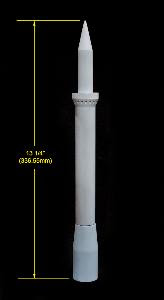 I am hoping that I can get my figures painted within the next few months, and actually do some gaming!﻿  Then I will expand my Ambush Alley project into Lebanon, 1982.  Americans, Israelis, PLO, Christian militia, maybe even Syrians.  Should give me plenty of gaming options for 2011!
Happy New Year!
Solid Copy by Darryl R. Smith at 08:39