Oh, start drooling now, go on, get it out of your system.  As mentioned in my previous post, I am having a couple of buildings and some shanties created in trade for some 20mm figures.  The pics in the previous post show the excellent work on the mosque, and now I have some "sneak peek" pictures of L'hotel de Somalia, a motel based on the Olympic Hotel made famous during The Day of the Rangers.  Look at this work!  The floors lift off allowing access (and building clearing possibilities) to every room on every floor.  Heck, there are even stairwells and an elevator shaft!
Alas, the bad new for the rest of you, this chap does not really do commission work, so you will just have to game/live vicariously through my posts and pics! 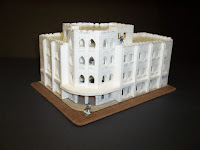 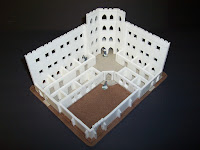 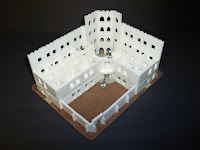 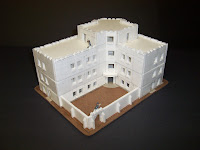 Email ThisBlogThis!Share to TwitterShare to FacebookShare to Pinterest
Mentioned in the Dispatches: Mogadishu

I am trading some 20mm figures in exchange for a couple of 15mm scratchbuilt buildings made, specifically a small mosque and hotel to use with my Deimos Design Studio and Kerr and King buildings, taking my tiny village setting into a bit larger of a village/town setting as needed (the hotel will be psuedo-based on the Olympic Hotel of Black Hawk Down fame).  By adding these buildings to my existing ones, I can now put a dozen structures on my three foot square gaming space I am using for Ambush Alley (I just feel like the two foot square suggested in the rules for 15mm figures is a bit too small).

So the chap making the buildings has sent some work-in-progress pics of the mosque, and OH WOW, am I ever blown away!  For my gaming needs I requested lift off roofs and a small minaret for the mosque, and the builder has come through in a big way (I am not sure if he does commission work so I am reluctant to give out his name...pending a reply from him on that very issue).

As you can see, the mosque is coming along very nicely, and I cannot wait to get this bad boy on the table as most the buildings I have are smallish single room structures of one or two stories.  I'll let the pics do the rest of the talking. 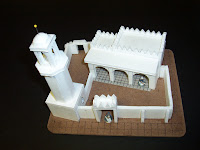 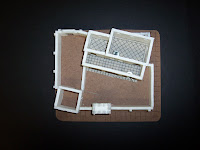 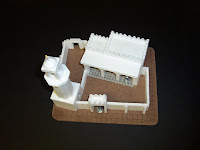 Email ThisBlogThis!Share to TwitterShare to FacebookShare to Pinterest
Mentioned in the Dispatches: Ambush Alley, Black Hawk Down, Deimos Design Studio, Force on Force, Kerr and King, Little Bird Down

We had a quick game of Ambush Alley Friday night at the Buzkrieger bunker (Cincinnati) with a few of the Buzkrieger boys along for their first taste of AA (they mostly do WWII microarmor).  The G Dog brought his 25mm setup, using Battlefield Evolution figures.  The insurgents came away with a fairly convincing win, even after being down to just a few figures on the board.  The Marines simply could not get to the contractors quick enough before the insurgents received reinforcements in key areas.  Fog of war played a bit of a part in this one, a building was determined to be on fire, which channeled one of the Marine fire teams towards a Haji hotspot.  That fire team was able to securely move into a building, only to be close assaulted by a ten figure Haji force.  The insurgents lost a few figures from Marine fire, but were able to pass their morale check and swarm the Devil Dogs, eventually killing two and capturing two.  On the other flank the two Marine fire teams were having a hard time getting around a fifteen figure insurgent group, but one that had no leader, and after failing three troop quality checks, that force was finally shot up and bypassed.  But again, another insurgent force came into play just in time to secure a commanding position near the SUV.
We still struggle with some of the interruption/reaction sequence, and cannot determine that after all Marine units have moved and fired that if they can react again to insurgents who have not previously taken an action.  It did not help that I had a copy of the rules that were of a later version than The G Dog, so finding the same sections at times was interesting as the page numbers were not the same for the two versions at hand (and I had a third version from a PDF download that was yet again different).  But, overall, I think we are enjoying the feel and ease of play of the game. 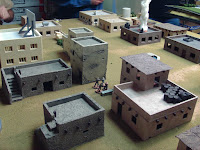 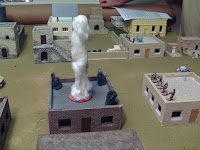 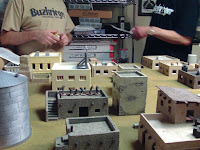 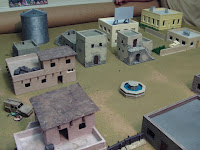