Last night I decided it was high time (or low time, I'm not picky) to build my first RAFM Imp.  I have four of these wheeled personnel carriers (which I have owned for quite a long time) to use with my Eureka sci-fi Germans as I think they give a nice futuristic look without being too over the top.  I opened one of the Imps months ago to look at its components, and thought it wouldn't be too much of a chore to put together, but simply never got around to building the kit.  Since I have been on a miniatures binge of late, I decided it was time to start assembling the Imps. 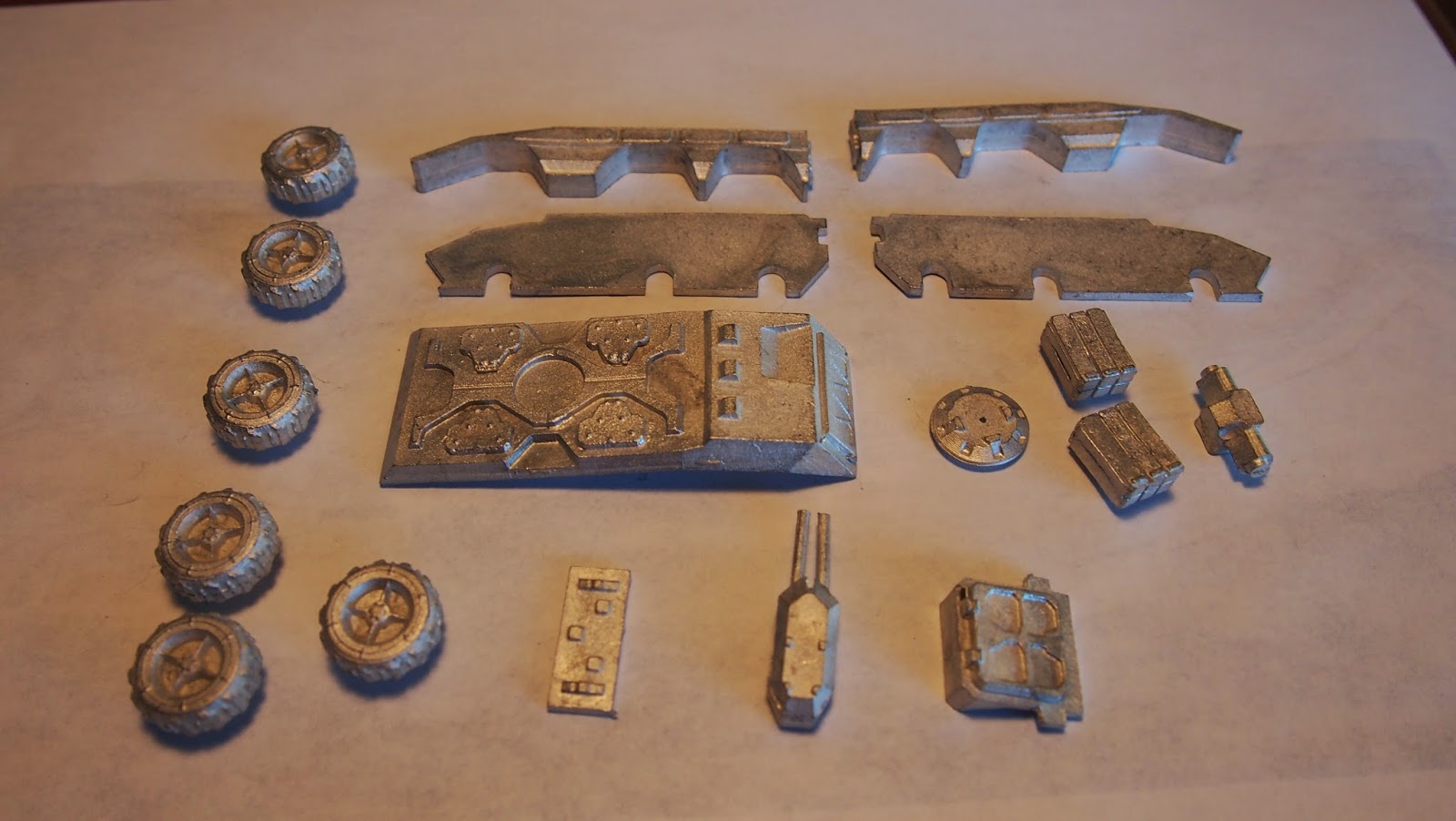 I called it kit for a reason, as there are eighteen parts in each Imp pack, and while it is fairly obviously where the parts are supposed to go, getting them there wasn't the easiest thing to do.  With assembly instructions and a picture of a completed Imp as reference, I moved ahead with the construction.  The undercarriage pieces gave me fits, having to get the undercarriage panels to line up correctly with the rear and front panels, while trying to keep them lined up with the top, and trying to keep from getting glue on my fingers as I fiddled around, was a bit of a P.I.T.A.  After failing to keep my fingers glue free and adding some appropriate swear words, I was finally able to get the undercarriage to "square" and hold properly.  After that, the rest of the Imp was a cinch to assemble.  The most difficult item I had left was the decision on using the missile or the gun turret.  I decided to go with the gun version for the first Imp, and probably will build all four the same.  I suspect that the remaining three Imps will give me significantly less assembly trouble as I now know what to expect.

I primed the Imp with some Armory light gray spray.  I tend to use light gray for all my priming.  There are many who use black or white, but light gray seems to take a coat of paint "better" for me.  Black obscures the figure's details a bit too much, and white leads me to paint more than one coat.  Paint scheme will be very simple, simply as I do not have the time nor skills to create something more elaborate.  Panzer grey will most likely be the color of choice, as dark gray will really allow the colorful National insignia I plan to use to pop out.  So Panzer Gray, some blackwash, a little drybrush highlighting, add the insignia, paint some black on the tires, and the Imps will be ready to roll.

I built the second Imp tonight, and as expected, it did go together a bit easier.  I have some minor gaps where the undercarriage panel suffered from some very minor warp-age, but overall it went together much more quickly, and I have no glue on my fingers this evening!

Update: Was provided THIS LINK about a great Imp assembly article.  Wish I had seen this before I started!

The term Imp in German is Kobold, which reminds me far too much of Dungeons and Dragons, so I will be coming up with some sort of Germanic name for the Imp.  It is an armored personnel carrier, which in German is schützenpanzer, so perhaps an homage to the Schützenpanzer models of the 1950s is in order.
Solid Copy by Darryl R. Smith at 20:09

Email ThisBlogThis!Share to TwitterShare to FacebookShare to Pinterest
Mentioned in the Dispatches: Eureka Miniatures USA, RAFM