I have decided to create a Korean War gaming forum, modeled a bit after the Fields of Fire Vietnam forum, for those gamers and history buffs who want to talk all things Korean.  Please go join if you have an interest!

Gaming the Forgotten War
Solid Copy by Darryl R. Smith at 19:05 No comments:

Email ThisBlogThis!Share to TwitterShare to FacebookShare to Pinterest
Mentioned in the Dispatches: Fields of Fire, Gaming the Forgotten War

Currently running on The Miniatures Page is a poll regarding the best Korean War movie for wargamers.  Not sure who selected some of the titles but it does pique the interest a bit when I realize how many movies on Korea I have yet to see.

Email ThisBlogThis!Share to TwitterShare to FacebookShare to Pinterest
Mentioned in the Dispatches: The Miniatures Page 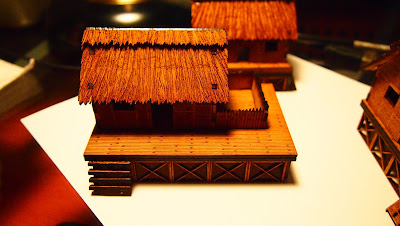 I completed the assembly of the final Eleven Tree Designs building last night, and of the three, from a design perspective, it may be my favorite.  The addition of a fenced in area along with a different style of ladder (that involved adding the individual steps to the rungs) leads to a building with flair.  And this time I did remember to snap pictures with figures for scale purposes (The Scene's special forces - think the movie Predator).  The assembly again was very similar to the first two buildings: build the main walls, build the bottom base, build the roof, glue the walls to the upper base and the upper base to the lower base, and you are pretty much done.  No apex for the roof again, but I do not think it needs one.  And I really do not think I will be doing much for painting...when I showed the wife she thought they were already painted and ready for the table.

I'll let the pictures take over from here. 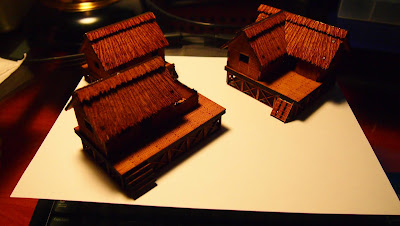 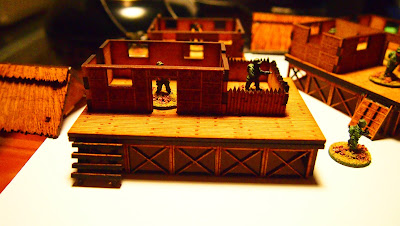 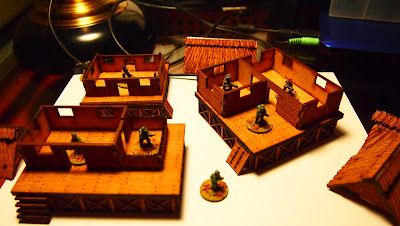 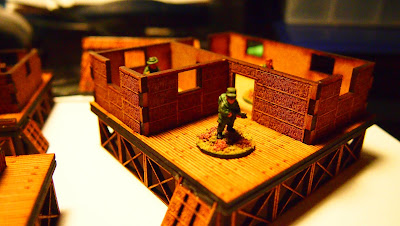 Email ThisBlogThis!Share to TwitterShare to FacebookShare to Pinterest
Mentioned in the Dispatches: Eleven Tree Designs, The Scene, Vietnam 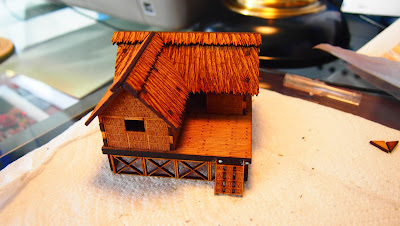 Here is the second building I have now constructed from Eleven Tree Designs (Code AS2).  I would say that assembly was very similar to AS1, with a few additional steps due to this being a two room building and having an L shaped roof.  The building footprint measures 3.5" square.

Just a few comments about the assembly process. 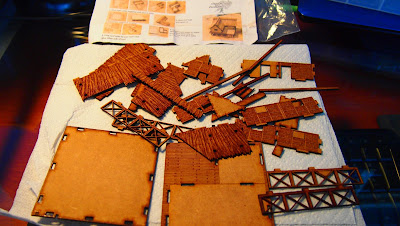 The above are minor quibbles...I am really quite happy with these gaming pieces.  I was asked on the Fields of Fire forum about sturdiness, and I think once the glue has dried you will find these to be very sturdy pieces for your tabletop.  They should not chip like resin can, and as long as they are used with some caution, should provide years of gaming enjoyment. 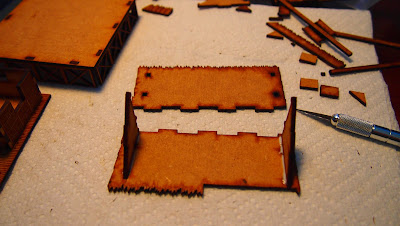 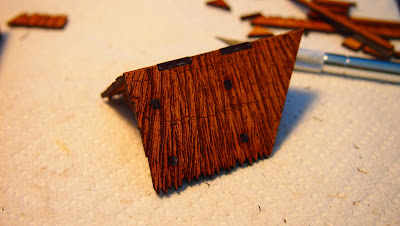 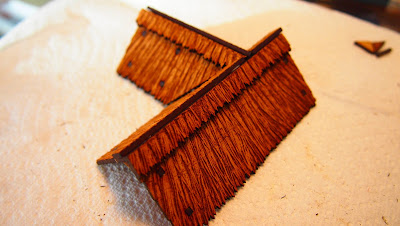 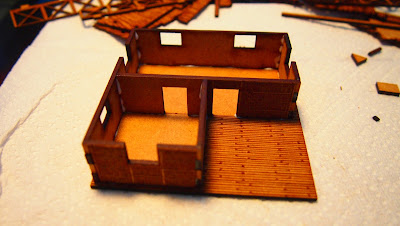 Email ThisBlogThis!Share to TwitterShare to FacebookShare to Pinterest
Mentioned in the Dispatches: Eleven Tree Designs, Fields of Fire, Vietnam

From time to time I have this cold war affair with gaming Vietnam.  I have purchased and sold more Vietnam figures than anything else I have let go, and have done this is a few different scales.  Once again the cold war is hot as I have renewed my interest in southeast Asia, mostly through the great folks who are on the Fields of Fire forum.

I can keep this project relatively small this time, using Ambush Valley and 15mm figures, also using the palm trees and green interlocking tiles from The Terrain Guy.  I need to add more vegetation, small clumps of grasses and what not, and of course I need buildings suitable for Vietnam.  There was a mention on the forum about some 15mm buildings from Eleven Tree Designs, but after checking out the Eleven Tree website, I could not locate them.  A message to Eleven Tree on Facebook received a timely response, and before I knew it, I was buying their southeast Asia building set via PayPal.

Those who have been following this blog for any length of time know that I for my style of gaming, particularly using Force on Force - Ambush Alley - Tomorrow's War, know that lift off roofs are a must.  The Eleven Tree Designs buildings, at least their southeast Asia offerings, fit that requirement.  They are made from laser cut medium density fiberboard (MDF), and in looking at the pictures I was sent I was very confidant that these buildings would be great for not only southeast Asia, but could also provide a few structures for my Predator game.

After a couple of weeks my buildings arrived from the United Kingdom.  Three baggies, each containing a building, were inside the neatly packed, and aromatic box (I love the smell of laser cut MDF in the morning).  I pulled out building AS3 from its baggie and dry fitted many of the pieces together, noting their clean cuts and perfect joints along with their super detailed railings, building walls, and roofs with a thatch design already burned in.  I knew that putting together these buildings would be an enjoyable and fairly quick task, and I was correct in that assessment.

Today I constructed building AS1, which is the smaller of the three buildings.  Dumping out the parts, I started to assemble this structure, using the enclosed instructions (with pictures) as a visual guide.  I picked up some Elmer's Craftbond glue (it is a white or PVA type) as it not only works on this type of material, but is also tacky which helps keep the pieces in their proper places while the glue starts to dry.

I worked my way through the process, and realized a few items of note.  First, with the way the upper base can be glued to the lower base, one could slightly modify the appearance of each building by either turning the upper base or flipping the lower base..  The picture of AS1 in the instructions showed the ramp or stairs to the right front of the building.  I decided to build mine with the ramp on the right side of the building.  One could easily have the ramp to the left front or left side as an alternative plan.  This means that this one building could have several slight variations. 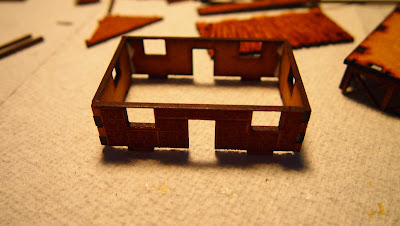 I also noted that I was missing the thin strip that runs across the top of the roof, filling in where the two top thatch pieces leave a gap.  No worries there; a nice bead of glue filled the notch nicely and once painted should look natural.

One last issue was the small rail sides along the top base.  I received four railings, but the lengths did not allow all four to be used as two were simply too long.  Being lazy and not wanting to make a couple of simple cuts, I left the side rails off, which to me actually looks a bit better.

The footprint on this first building is 2.75" square, with an extra quarter inch for the stairs.  The height is also 2.75".  With the lift off roof, over a half dozen figures could be placed within. 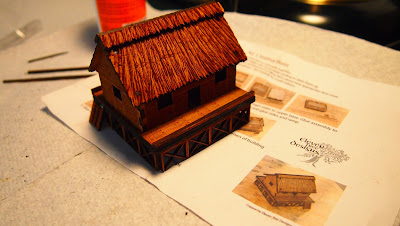 The Cons - The missing roof strip, two rails of the incorrect size, and the roof ever so slightly rocks when on the building.  Very trifling cons in my mind.

The Pros - The detailing, the clean cuts and ease of assembly, the communication with the owner, the ability to have some slight variations, and the lift off roofs.

I purchased all three buildings, including shipping from the UK to the US, for just under $50.00.  Three very detailed buildings, suitable for southeast Asia, with lift off roofs, and of a decent size, and I am completely satisfied with my purchase. 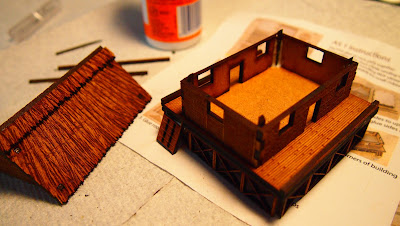