Hmmm, now that I have these bloody Aphids, what to do with them?

My last post was a brief entry on how I purchased some nicely painted Zombiesmith Aphids from javelin98 from an ad he had posted on The Miniatures Page.  As mentioned in that post, the Aphids are not quite as hard sci-fi as I might normally like in a figure, but these could be a humorous force to throw on the table to go against really any OPFOR I may want to use.

I have decided to rate the Aphids as follows, based on the unit attributes found both in Tomorrow's War and By Dagger or Talon.  I have also decided to add one vehicle trait is not normally used for non-vehicular units, but one in the case I think melds well with my perception of the Aphid race.

Aphids - (German slang Die Frösche (The Frogs) - Humankind does not know much about these amphibian-like aliens, other than they seem to be a different sort of threat than the Darghaur.  Where the Darghaur are ruthless, powerful, and bent on violent destruction of any worlds and races it may encounter, the Aphids are dangerous for other reasons.  When they move onto a planet's surface, they gorge on any type of flora and hence completely destroy any plant life, rendering a planet desolate.  Second, they reproduce in vast numbers, which allows them to not only destroy plant life in a rapid manner, but also accept incredible amounts of casualties in combat before breaking.

First encountered by a German deep exploration team on Grüne (later derisively called Fröschwelt), in the year 2311, the team was surprised to meet these rather frog-like aliens (wielding photon weapons, in huge numbers, in a marsh-like environment) as previous scans of Grüne did not indicate any advanced lifeforms.  It has now been posited that the Aphids reached Grüne shortly after the last scan had been completed, just a few months before the team set foot on Grüne.  Based on the numbers encountered, it is difficult for humans to imagine that any ship or fleet of ships could have brought such a large population, especially as there did not appear to be any constructed habitats on Grüne.  But it was noticed that the Aphid population continued to grow and expand while leaving a path of desolation in their wake, much like a swarm of locusts (leading to another German term - Die Heuschrecken).

Encounters with the aliens were hostile from the start and any attempts to show friendly intent were met with blasts of photon energy.  The security squad attached to the exploration team reported that the Aphids could jump great distances, could stay in water for long periods of time, and were numerous but ineffective fighters except in ambush.  Their photon weapons, while packing a punch, were not very accurate, and the security squad mowed down the Aphids in droves before they finally broke contact.

With the ability to reproduce seemingly at will and the effective denuding of any planetary fauna, the Aphids are definitely a threat to humankind. 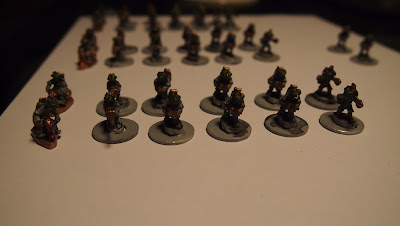 Organization - Roughly twelve Aphids make up a combat unit with a leader armed with a photon pistol, two medium photon gunners, two scout craft with heavy photon guns, and seven soldiers armed with photon rifles.  Three groups of twelve make up an army, with a leader and a bodyguard in the command element.

Tactics (as known) - The medium photon gunners are usually deployed on either flank to provide crossing fields of fire, and do not move from position unless necessary (and do not count as jump troops for movement).  The two scout craft are used to test the enemy's strength or to threaten an enemy's flank, while the remaining eight Aphids move rapidly towards the enemy to engage within optimum range.

Three groups of twelve make up a brood, with a leader and a bodyguard in the command element.

For some unknown reason, when Darghaur face the Aphids, they suffer from the Intimating attribute and the Aphids add the Fearless attribute.
Solid Copy by Darryl R. Smith at 20:40

Email ThisBlogThis!Share to TwitterShare to FacebookShare to Pinterest
Mentioned in the Dispatches: Aphids, By Dagger or Talon, javelin98, The Miniatures Page, Tomorrow's War, Zombiesmith