The Black Brunswickers (Federation) and their Venturian opponents have arrived!  I got my goodie box from Darkest Star Games a couple of days ago, and must say that these are really nice figures.  Yet another company making some quality 15mm sci-fi castings.

Over the last few days, after some comments I had left on the Darkest Star blog, I have come to realize that the Darkest Star owner is none other than Darby from the Fields of Fire Vietnam forum.  Talk about a small world!  Here I thought he was this 'Nam gamer (which he is) and he also owns a company offering some really nice sci-fi figures...crazy.

Okay, now to the figures (warning, a bit of a review coming up)....

Each figure is different, and either in an advancing, standing, or firing pose.  The troops carry a wide variety of weaponry, including advanced combat rifles, Gauss marksman rifles, plasma rifles, accelerator carbines, and particle accelerator rifles.  I have added a note on the picture from the Darkest Star website as to what each figure is carrying below.

The casting is clean, with just a touch of flash to be removed.  Details and proportions are excellent.  The weapons do not suffer from "bazookaitus" that some figures suffer from, especially in 15mm.  The metal reminds me of when MiniFigs moved from lead to a tin alloy, but the metal is pliable, not brittle.

As for using these Venturians with the Eureka offerings, I would say no.  While I no longer have any of the Eureka Vents, I do remember them being much larger than the Eureka sci-fi German storm troopers, and the comparison pictures below indicate to me that the Darkest Star Vents would be smaller as they match nicely with the Eureka Germans. 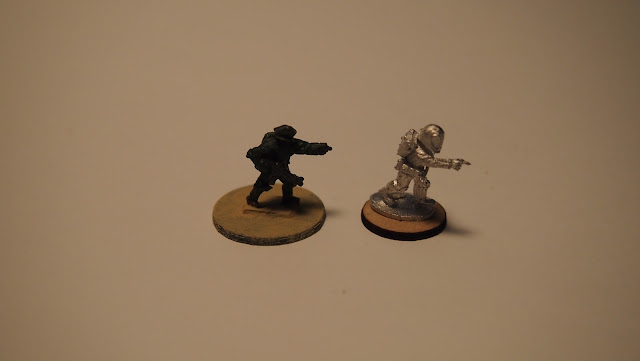