Thoughts on the Vietnam Project(s)

With my recent gaming experience using Two Hour Wargames' FNG rules, my interest in gaming Vietnam has dramatically increased.  I stopped at Half Price Books over the weekend and snagged three mass market paperbacks, two of which I had owned and read years ago.  The Village, by Bing West, is a great read about a Marine squad and their experiences within one village, and I was glad to buy it again for a penance.  I also picked up Inside Force Recon, a detailed look at some of the best operators in Vietnam, that starts well before Vietnam then delves into numerous stories of missions that involve Force Recon; this was also a title I owned some years ago.  The last title is The Proud Bastards, about a young Marine's journey from Parris Island to his severe wounding while serving in the 4th Marines.  The last title is another of a huge number of solid memoirs, although at times it is difficult to plow through as the author really gets you inside his head with long rambling trains of thought.

I have always enjoyed small unit actions, which of course the Vietnam War has numerous examples far beyond reckoning.  And gaming actions described in books or movies is a great way to jump into a project.  I already have some painted Flames of War American infantry, and while I am waiting for Flashpoint to make some Khmer Rouge for my Koh Tang Island project, I am considering some other Vietnam diversions. 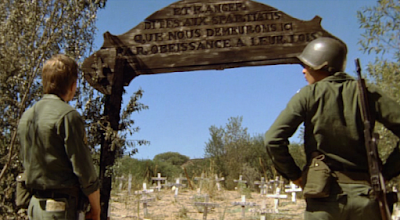 One diversion is something based around Go Tell the Spartans, a movie that is set during 1964.  An American advisory team, some Nung "regulars', and some local forces, facing off against some fairly experienced Viet Cong.  Without trying to buy too many buildings and trying to do the movie as is, I think I will use it more as an outline to replicate the forces and setting.  Flashpoint make a Montagnard patrol pack, that would work well for the local pro-government militia types or possibly the hired gun Nungs.  Some of the figures from the Flashpoint RFPF pack could be used for the Nungs as well (some of the figures are carrying AK-47s and M-16s).  The local force VC packs can be used as the Viet Cong of course.  Flashpoint will be making both a Free World fire-base and a CIDG camp bundle at some point, and I am thinking that there should be items in both bundles that might be cobbled together to suit a Muc Wa-type setting.  I already have those Eleven Tree Designs jungle buildings, and Sarissa make many more laser cut buildings for the Far East that includes a watch tower.

The American advisors would probably be best suited by using a mix of World War II figures and other suitable Nam figures, as most are carrying M1/M2 carbines or M3 grease guns with some wearing steel helmets and others with soft covers and boonie hats.  Flashpoint is going to make some CIDG/MIKE Force support figures and infantry with M2s.

Of course, once I develop terrain suitable for a Go Tell the Spartans inspired adventure, I should have enough to then delve into other Vietnam projects with little effort beyond figures.
Solid Copy by Darryl R. Smith at 09:44