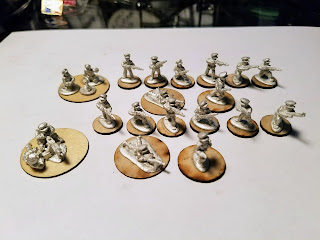 I had mentioned in a previous post another possible use for my Khurasan Chaco War figures...Banana Wars.  Tonight I mounted a couple of squads of infantry along with a Vickers heavy machinegun and a light mortar team.  Each squad is made up of six riflemen (armed with bolt action Mausers), a light machinegunner with a Vickers Berthier LMG, and an officer with a pistol.

The government forces pay lip service to the Yankees, offering the barest of support in field operations, as they have their own agenda when it comes to controlling the populace.  They are well equipped, but are poorly trained, and man for man not a match for the rebels that dominate the countryside.  But they are necessary for local leaders, "loyal" to El Presidente, to maintain tight control over the provincial towns.
Solid Copy by Darryl R. Smith at 20:17 2 comments:

It has been some time since I have written about the Banana Wars or China Marines, and so I think it is time to get this project moving a bit.

I have had several packs of the excellent Eureka Wake Island Marines for some time, and pulled them out last night to start working on them.  After mounting what I felt to be a suitable force I actually wound up with more figures than I need (is that a thing?), so I am selling off* my still-in-bag extra figures as I have plenty to take on what ever opposition they may encounter.

This is what I have:
Sixteen riflemen with Springfield
Two BARs
Three Thompson SMGs
Three Lewis guns (one will be used on the gunboat for air defense, even though the bad guys don't have any air assets at the moment)
One HMG
One medium mortar with crew
One Boys ATR
Two officers

Supported by a Richard Houston gunboat (thanks, TVAG!) and a couple of Futura Grumman F3Fs, the Marines (and sailors) offer a heck of a force pool to chose from.  I will probably work up some sort of chart that will allow me to randomize the American forces as putting them all on the board at once is probably going to overwhelm the bad guys.

About that opposition - I was hoping to find suitable Chinese to do the Sand Pebbles thing as I also have the Eureka U.S. sailors, but the Eureka Chinese don't quite have that movie feel, so I am going with my Khurasan Chaco War figures and Eureka Filipinos instead, and moving the Sand Pebbles to the Caribbean.

A couple of years ago I picked up a few packs of the Eureka North Koreans for the Korean War as I was, at the time, trying to decide what scale to game the ground war (see blog post).  I have since decided not to game the ground war, focusing on air combat, but I was going through some of the lead pile today and decided to get these little gems out and placed on bases.  Alas, I cannot seem to find these figures on either Eureka site any longer, so I am glad that I have the ones I do.

The figures have that same high quality one comes to expect from Eureka.  Very little flash is evident, and a quick file across the bottom is pretty much all the prep work needed for basing onto my standard of 15mm round bases for grunts and 20mm round bases for leaders, weapons as needed.

What do I plan to do with the figures?  Use them as "advisors" for my Indochina project, just for fun.  I guess it wouldn't be a huge stretch to see another communist entity sending military advisors to Indochina, although I do not believe it ever happened in the case of the North Koreans.

Now I have even more figures to base-prep and prime!  With colder temps coming on, priming outside (which really means on my condo balcony) is not in the cards, so most likely this winter will be spent doing a lot of Gesso brush priming.
Solid Copy by Darryl R. Smith at 19:48 2 comments:

I was able to get the Viet Minh based a couple of nights ago (luckily my wife had a tube of superglue since the cap on mine was glued on tight).  I have two groups of Viet Minh, each basically a large or reinforced squad in size.  Each unit consists of eight riflemen with assorted rifles, four sub-machine gunners with assorted SMGs, two light machine-gunners, and an officer.  I wanted a larger force of Viet Minh as I plan on using a random force generator for the Communists and having a mix of troops will accommodate that.

For the French I have two smaller units, each consisting of three riflemen, one sub-machine gunner, one RTO (with SMG), one rifleman with an M1 Carbine, and an officer with an SMG.  There is also one light machine-gun team.  I am thinking I need to add one additional LMG team just in case the Viet Minh roll multiple LMG support.

Next steps will be getting the bases prepped and then a coat of primer.
Solid Copy by Darryl R. Smith at 10:16 No comments:

I received my order from Eureka USA a few days ago, and the figures are very nice.  Of course, once again service from Eureka USA was amazing.  I also received my order from Litko in record time, normally it seems to take two weeks to receive orders from Litko, but my latest need for a fix only took a few days.  Then I realized the bases I ordered were the thin and not the medium thickness, but the difference is fairly minimal.

Last night I took a few minutes and mounted the French.  This force amounts to an oversized section which I am breaking into two weak squads.  Each squad will consist of three riflemen with MAS36, one rifleman with M1 Carbine, two MAT49 sub-machine gunners, and an officer/squad leader, armed also with an MAT49.  There is also a light machine-gun team with an FM24/29 and a rifleman (with MAS36) as assistant gunner.

Tomorrow night I plan on getting the Viet Minh on their bases.
Solid Copy by Darryl R. Smith at 19:42 2 comments:

Getting Ready - Mounting Some Vietnam Figures

I bought some 15mm Vietnam Americans from a chap some time ago, and left them sit in the box used for shipping until today when I decided to get them mounted on stands.  This of course couldn't be an easy chore when I realized that the M60 gun teams were not going to fit onto a 20mm round base, so off to the Litko website I went to order some 25mm and 30mm round bases.  The other troops (except for the recoilless team, two LAW grunts, and medic with casualty) I was able to use my standard mounting of leaders on a 20mm base, and grunts on a 15mm base.  Once I receive my order from Litko I'll texture the bases with some grit and plop down a couple of bushes to finish them off.

The figures are the Flames of War Army platoon, and seem to have a couple of extra M60 gunners, at least based on the Ambush Valley U.S. Army infantry platoon structure.

Email ThisBlogThis!Share to TwitterShare to FacebookShare to Pinterest
Mentioned in the Dispatches: Ambush Valley, Flames of War, Litko Aero, Vietnam

As a bit of a sidebar to my Vietnam gaming, I just placed an order with Eureka Miniatures USA for some 15mm French and Viet Minh for Indochina.  For quite some time I have been looking at these figures, and with a bit of a renewed interest in Vietnam of late, including sifting through the Indochina board on the Fields of Fire forum, I decided a small purchase was in order.  I was originally going to purchase a platoon for each side, but settled on fewer figures, basically a heavily supported section, with rifles, SMGs, LMGs, leaders, and RTOs.  As I have plenty of jungle terrain ready to roll (Eleven Tree Designs buildings along with several terrain pieces), adding some figures to go back to the 1950s was a fairly easy decision.  Paint jobs will be simple as I plan to just do some olive drab for the French (I might even try some camo...nah, I doubt it!)

The force pool I selected probably will not allow use of Ambush Valley or any other form of Ambush Alley/Force on Force since I will not have enough figures for each player to run a section, so I will have to do a bit of digging for a set of rules.  The goal is to have each player control a handful of figures.

More on this once the figures arrive!
Solid Copy by Darryl R. Smith at 20:48 No comments: