A few comparison pics showing the Khurasan Alien Invasion and Late 21st Century figures recently purchased for use as X-COM proxies (since I have been playing the old version a lot recently).  Two types of aliens, one for the sectoids and the other for the mutoids mentioned on my Tomorrow's War page.

The figures are excellent.  The humans share similar styling to the Peter Pig modern U.S. Marines.  Not as chunky, I would rate them as 16M on the Barrett Scale, meaning that they are of medium heft and measure 16mm from sole of foot to eye.  There is one advancing pose that is a bit off, one leg hiked in the air like a dog leaving his scent (not shown in the picture).  There was also some flash between the legs on some of the figures, which I found to be a bit odd for newer castings.

The war caste aliens, which I will use as Mutoids, are 14M on the Barrett Scale.  The science caste aliens (which will be the sectoids) are 13L.  I like the fact that the war caste figures are a tad taller and slightly heftier.

The first picture shows the section organization.  Two fireteams, each team with two riflemen and two energy weapons, led by a section leader. 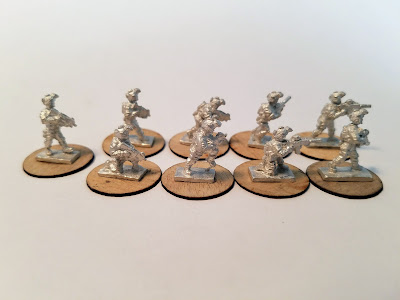 The next picture shows a science and war caste alien with a human. 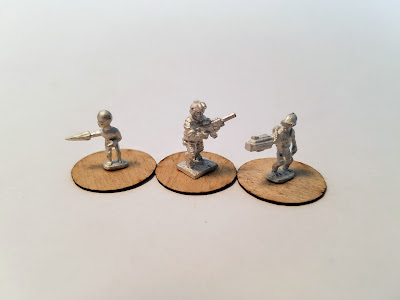 Lastly we have the aliens shown for comparison. 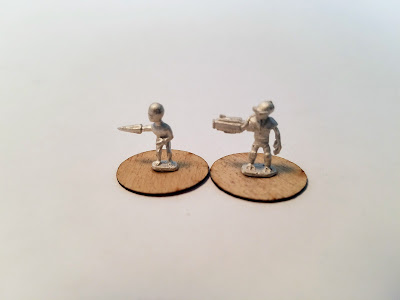