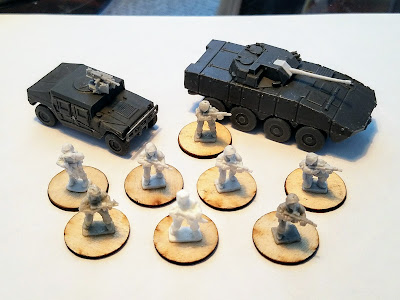 Just a quick blurb about getting the modern Polish I picked up from Terrain4Games based (infantry) and built (vehicles).  The infantry are mounted on Litko bases, 20mm round in this case.  The M1114 and Rosomak both went together easily, with a touch of filing to make everything fit a touch more cleanly.  I filed the bottoms of the wheels as well to ensure that both vehicles would sit flush on the tabletop.

Next step will be priming!
Solid Copy by Darryl R. Smith at 17:29 No comments: 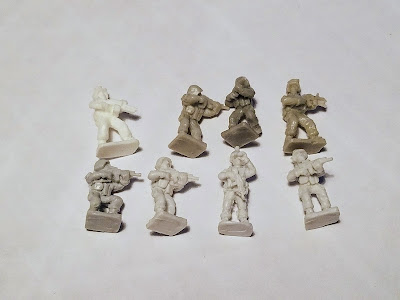 Okay, another one of those purchases that I think "that's cool, I can use them for...."  I really have to stop doing this! 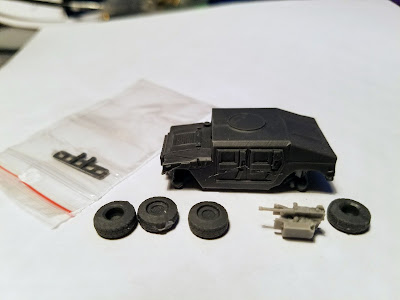 For months, off and on, on and off, I have made some visits to the Terrain4Games website to look at their modern Poles.  What kept me from buying any of their figures was the shipping cost to the United States from overseas for a small amount of resin figures.  However, some of their listings on eBay actually have reasonable shipping costs, so I ordered the "full" kit of eight soldiers, an M1114 (HUMVEE), and a KTO Rosomak.

The eight soldiers are carrying a mix of weapons as follows: five with the wz.1996 Beryl assault rifle, two with the wz.1996 Mini-Beryl, and one with the UKM-2000, which is an updated PMK machine-gun, firing the 7.62 NATO round.

I placed my order on April 5th.  Expected delivery date was given as after May 5th.  Actual delivery was April 26th, a nice surprise.  The medium sized box was packed well with plenty of bubble wrap to protect the vehicles and figures. 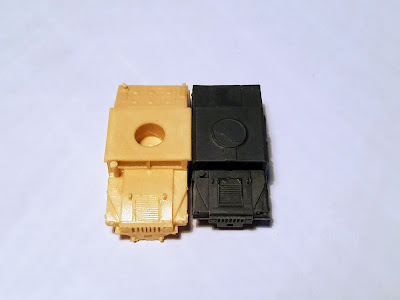 The figures measure about 16M on the Barrett Scale.  They are decently animated, with just a smidgen of clean-up needed to remove some resin "flakes."  The bodies are in good leg/torso/arm proportion, and the weapons seem to be scaled correctly and do not suffer from bazooka-like size that can occur in 15mm figures. 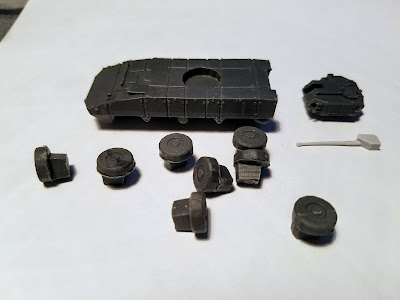 The M1114 comes in six parts.  Detail is good, casting is fairly clean with some cleanup needed, but a few seconds with the X-ACTO will take care of that.  The wheels glue onto axle posts, the grill needs to be added to the front, but the machinegun seems to have an issue as the bottom of the MG has a small round post that should go into a corresponding hole on top of the M1114, but there no corresponding hole.  I might have to file down the post.  The MG probably has the most resin to clean up, but again should be a relatively quick chore.  (picture shows comparison with an Irishserb M1114)

The Rosomak (wolverine) comes in eleven pieces - chassis, turret, gun, and eight wheels.  Detail is excellent.  The wheels have giant tabs on the back that align with slots on the chassis, ensuring an accurate fit.  The gun mounts cleanly onto the turret.  This is one nice looking wheeled armored vehicle.  Two issues though - the turret is slightly loose when positioned on the chassis, allowing a bit of slippage, and the gun was cast with a slight upward gradient as it moves away from the turret.  Being made from resin, I am not going to be able to align the gun back into proper position, but one has to really look at the vehicle to notice.
Solid Copy by Darryl R. Smith at 20:38 No comments:

Come to the islands!

Some scattered thoughts regarding a Grenada project, you know, that thing called Operation Urgent Fury?  Some years ago I had some 20mm figures for this conflict for skirmish gaming, but as I have mentioned previously my space is limited so 15mm is the preferred scale...oh, sorry scale snobs...preferred size, for most of my land gaming projects.  And Grenada calls out to me every couple of years.  So today I spent some time doing some searching on blogs and gaming sites trying to find figures that would be somewhat accurate.  I will state it is going to be a chore.

Let's jump to buildings and terrain.  This is a bit easier to tackle.  First, I have some hand made shanties that should add a suitable slum element to part of the tabletop.  I also have tropical trees and plants (well, they are mostly desert, but they'll do in a pinch), along with some Flames of War Vietnam foliage and trees.  I have some green tiles from The Terrain Guy (now defunct) for the gaming base.  But I do need some additional buildings, and in doing some searching there are plenty of pan-tiled roof buildings on Grenada, shades of the Mediterranean.  Empires at War make a series of prepainted mdf and laser cut Spanish/Italian buildings that should do nicely.  Okay, terrain really isn't much of an issue.

Back to the figures. I own three packs of Quality Castings modern Americans.  Given the fact that these figures were probably sculpted well over twenty years ago, the term modern fits a bit more with late Cold War.  Do they have the correct weapons?  Let's try a bit of pass/fail.  The weapons pack has the M47 Dragon (pass), the M60 machinegun (pass), LAW antitank launchers (pass), Stinger missiles (no need for these), and the figures are wearing the kevlar helmet (fail for Marines, pass for 82nd Airborne).  The basic infantry packs have M16s, some with M203 grenade launchers (check), but again with the kevlar helmet.  And the Quality Castings range is so small in height (or should I say SCALE?) compared to other 15mm figures, with some figures showing strange poses.  I cut my WWII 15mm teeth on Quality Castings, but I am not 100% sold on their modern offerings, with so many newer ranges out there.

I found a few pictures of US Marines wearing the steel pot helmet with their sleeves rolled up, so perhaps Vietnam era figures might work after all.  I already own some Flames of War Vietnam figures, but they have things like cigarette packs and what not cast on, so they have a decided 'Nam feel.  Then I stumbled onto the Vietnam range from Khurasan.  You have to know the secret handshake to find them (or this link) as they do not appear under the historical figures listing, so I am not even certain they are available for sale.  I'll have to send an email to Khurasan to check availability.

Okay, so perhaps Vietnam figures will work for the Marines.  What about figures for the bad guys?  A bit tougher.  The Cubans could be handled via Peter Pig.  Their hardened militia look the part of Cuban military, even if they might not be in proper attire for Grenada.  Peter Pig also make Soviet helmeted African troops, which might work for the PRA.  There are also some militia packs that might be suitable.  I like some Peter Pig figures, and others I could do without.  Their modern Marines are excellent - chunky in heft, the open gaping mouth that is Peter Pig's signature feature not nearly as prominent, and they have animated sculpting.  Some of their other ranges are not as good (mostly from being older sculpts).

For vehicles I am going to keep it super simple, perhaps one BTR-60 for the bad guys and one AAVP7A1 for the Marines.  Butlers' Printed Models make both in 15mm for a pretty decent price, even though the shipping is a bit high (more than the cost of the two vehicles).  Irishserb makes an AAV7A1, wonder if I can get him to do a BTR-60?