I have been following this one for months, but forgot to mention it before now.  This is an excellent and highly interesting blog that focuses on a Twilight 2000 campaign in Poland.  You'll find it a good read as well as a source of inspiration.

Email ThisBlogThis!Share to TwitterShare to FacebookShare to Pinterest
Mentioned in the Dispatches: Twilight 2000 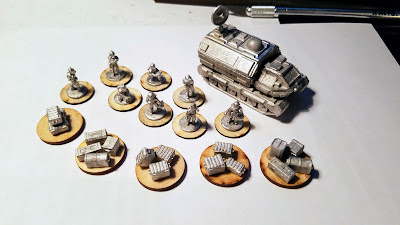 When I first decided to put together a Moongrunt project using the GZG excellent range, I wasn't planning on using rocket-armed troops as part of my forces, but after reading Luna Marine from the Heritage Trilogy I decided that adding what is a fairly common weapon system in the books made sense.  So off to the GZG I went, and ordered a pack of rocket-armed troops for both the Marines and the Chinese.  Of course, while there, I just add to add a civilian element to the project, so I grabbed a pack of crew in vac suits, a pack of survey team personnel (also in vac suits), a Surveyor II tracked vehicle, and a couple of tracked gunbots (although I am having a heck of a time getting the latter put together due to their small and fiddly pieces - a lack of modeling skills on my part).  Jon, as he often does, threw in a couple of freebies, in this case some stowage cans and ammo/supply cases, along with a pack of Moongrunt Marine rifles. Jon is an excellent dealer:  he offers wonderfully cast figures, fast shipping (although this latest order took a bit longer, which is why I think he threw in extra freebies), and will often throw in something for free that will meld with your order.

For the rocket troops, I am attaching one to each squad leader as a support weapon.  The Chinese rocket will be slightly inferior to the American version, in terms of accuracy, but a bit superior in punch.  Therefore, when firing the Chinese version, it will use a D6 on its attack dice, an anti-personnel rating of 2M, and an anti-vehicle rating of 3M.  The Marine version will use a D10 to hit, an AP rating of 2L, and an AT rating of 2L.  Of course, these will need to be tested.

The Surveyor II is not a combat vehicle, but does have a rating of 1D6 on all faces.

I used the various cases to create some terrain bits.  They could factor into a scenario as a victory condition as denying the enemy of supplies on Luna could be a devastating blow.
Solid Copy by Darryl R. Smith at 19:50 4 comments:

Email ThisBlogThis!Share to TwitterShare to FacebookShare to Pinterest
Mentioned in the Dispatches: Ground Zero Games, Moongrunt

Something I forgot to do, take some comparison pictures of my Eureka proxy Austrians as compared to the CP Models Taliban (and a Terrain4Games Pole, The Scene special forces, GZG Moongrunt Chinese, and a CP contractor, all for good measure) that I have as a potential OPFOR.  As you can see by the pictures, the two companies are decently matched, certainly good enough on the same table as opponents.  Actually, most of the companies do fine together.  The GZG and CP figures are a bit heftier, but not noticeably so from a few feet away.