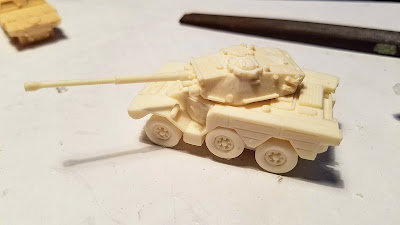 Another easy kit tonight, just trying to get these all built and then primed.  In this case the Panhard ERC 90 F4 Sagaie, basically a tank killing armored car, one that could use its 90mm gun to take on T-72s.

Nine pieces in this kit, consisting of hull, turret, gun, and six wheels. 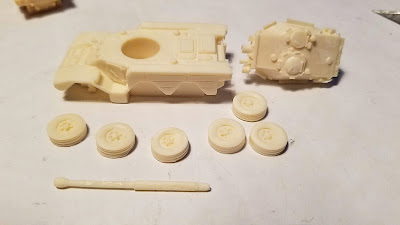 This build was rather simple, other than getting the gun into the hole in the turret.  It took a bit of widening the hole and scraping down the insert part of the gun, but once in it created a snug fit.

Irish Spring, or the Ayes Have It

So I was in the shower this morning, reaching for my body wash (I know, too much information), when it dawned on me, instead of Arab Spring, why not do some hypothetical or even sci-fi using Irish and call it Irish Spring?  Yes, lame it is, but what the hey.  It gives me a chance to use and mix figures and factions that really have very little to do with each other historically.

Some examples:
Three countries that begin with I, at least in English.  Dare I consider India, Indonesia, Iran, Iraq, Italy, and the Ivory Coast as well?  Okay, too many ayes there to even think about, but some of these countries could be a bit of a framework for a fictional setting, whether historical or science fiction.  An Irish-Israeli War?  Where would it take place?  An Iceland-Irish conflict, maybe along the Greenland coast or some of the small islands off the coasts of Iceland and Ireland?  Irish in Liberia, next to the Ivory Coast?  An Irish U.N. contingent in the Ivory Coast?  I know, all a bunch of silliness.  I agree, but it is still fun to think about.

There could be a bit of historical basis.  The Irish Army lost the most amount of U.N. troops as part of the UNIFIL mission, which supports the Lebanese Army.  Wouldn't be that much of a stretch to have a flare-up with Irish and Israelis involved, I would just need to figure out what sort of figures to use for the Irish as the Israelis pretty much stopped using the Galil in 2000, and the Peter Pig figures I have are Galil-armed.  But that is yet another arid climate project, and I would rather move away from that a bit at least.  It could be moved forward a bit, using the Eureka Australians as Irish, as Khurasan make a range of modern Israelis, although I hate the look of the latter's "chef's hat".

This one is going to take a bit more thinking I'm afraid.
Solid Copy by Darryl R. Smith at 10:16 2 comments: 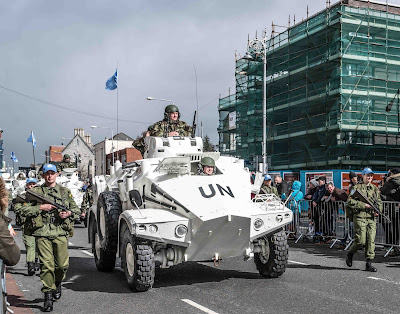 I decided to work on a couple of the fine vehicles I picked up from my friend Irishserb in a trade some months ago.  My plans for these are for some sort of Third World nation as the OPFOR, while using a variety of "good guys" to go against them (West Germans in a 1970s setting, 1980s Israelis, etc., etc.).  The Panhard could be a nice target, notice this pic of some poor Irish blokes with the white "shoot me" Panhard and blue "no, shoot me here" caps. 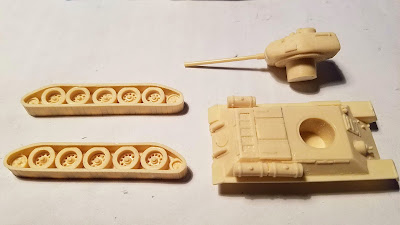 For this entry two vehicles, a post World War II T-34/85 and a Panhard M3.  The quality of the casting is readily apparent, as is the resin.  No bubbles, very minor flash, pieces fit nicely together.  Irishserb's prices are also super competitive.

The T-34/85 is a very easy build with only four pieces - hull, tracks, and turret.  There are ridges along the underside of the hull which to align the tracks in the proper position. 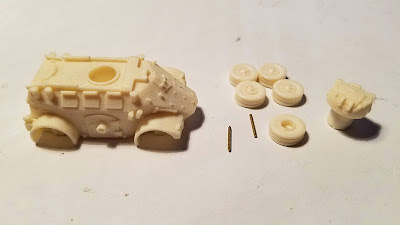 The Panhard is of nine pieces - hull, turret, wheels, spare wheel, and guns (two FN MAGs).  The guns are brass rods.  Again, assembly is very easy.  The wheel wells have a tab to align the wheels onto, the spare has a mount, and the guns insert into holes in the turret. 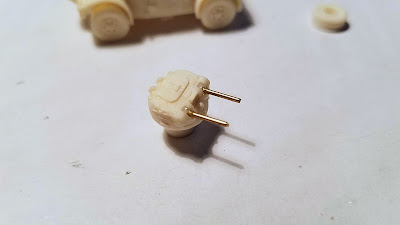 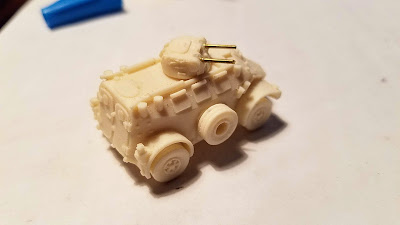 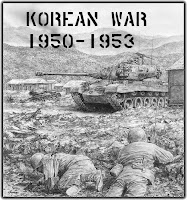 Getting a bit of traction on the Korean War gaming forum, entitled Gaming the Forgotten War.  If you have an interest in Korea, and in particular gaming Korea (1950s style at least), come join us!  With Pendraken's recent 10mm releases, it might be a good time to start a Korean War project.
Solid Copy by Darryl R. Smith at 20:44 3 comments:

Email ThisBlogThis!Share to TwitterShare to FacebookShare to Pinterest
Mentioned in the Dispatches: Gaming the Forgotten War, Pendraken Miniatures

A bit of a summary, mostly for my own later reference, but some of the projects I am toying with for Check Your 6!

Spanish Civil War - I have a few Heinkel He.51s, Bf.109s, and now with my friend's collection, some Cr.32s.  I need some more bad guys to go against them.  I do have four I-16s painted up, but in Soviet markings.

German-Czech What If - Just got my order for eight Avia B.534s from MSD, and I plan on buying some early mark Bf.109s to go against them, but I still need to find a few period German bombers to add in.  Most of the German bombers on the market that were round in 1938 are later period versions, and so a bit incorrect.

Romanian-Soviet Front - I like the Heinkel He.112, a lot.  While there were only a few made (less than 100) it is still a cool looking bird.  There is a neat encounter in June, 1941 in which Romanian He.112s are strafing a Soviet airfield while the I-16s based on the field are taking off.  Turns into a hairball of a fight, with a dozen Heinkels facing upwards of thirty Ratas.  Rating the He.112 is a bit of a bear, seemingly a tad slower than the Bf.109B, less agile, but more maneuverable, I think I would rate the 112 as follows:  A4+1, with a robustness of 1, and armed with FF: 2xLVC, 2xLMG.  This would make them a tad better than the I-16, with a better punch for armament, which should help a bit with the number disparity.  I already have four I-16s painted in Soviet colors, but would need to order some Heinkels from MSD along with a slew more of the Ratas.

Flying Tigers - I've always liked their story, and with the addition of several scenarios in one of the Check Your 6! books that was released recently, there are now something like fifteen scenarios published that include the Tigers.  I have no aircraft for this project.

Wake Island - Another one of those stories that pull me in again and again.  However, while I look the look of those Marine Wildcats at Wake, after the initial Japanese bombing attack, only four remained, and they faced Mavis flying boats after the initial attack.  I can't see buying a ton of flying boats for one project - they are expensive!  Perhaps I can do something from the Cactus Air Force scenario book as I do like the look of those early Wildcats!
Solid Copy by Darryl R. Smith at 10:27 No comments: