Today I placed an order from GZG for some additional OutRim Coalition forces, which will be my proxy figures for a Sword World force.  The mix of packs will allow me to field mission specific units by adding in numerous support weapons and higher command.

A quick placeholder to flesh out a project idea later for Traveller/Striker/Tomorrow's War.


Figures?  I have some of the Ground Zero Games Outrim Coalition that might just do the trick.
Solid Copy by Darryl R. Smith at 17:20 No comments:

The Swedes in Space!

Just a short entry as I play around a bit with creating a new faction for my Tomorrow's War project, using 2300 A.D. as a guide...the Scandinavian Union Defense Force.

Taking a hard look at the Ground Zero Games Scandinavian pack, and after obtaining a bit of info as to what the figures in that pack are actually carrying in terms of small arms (as you can see from the picture it is a bit difficult to discern what the figures truly look like), I have decided to add a cold weather force to my science fiction gaming.

The SUDF is organized into 28 man platoons, built on eight man sections with a command element of four men.  Each eight man section has a section leader, five riflemen, a SAW (or MG) gunner, and a man carrying a missile launcher.  Weapons are as follows:

The G4 has been the standard service rifle of the Scandinavian Army since 2288, when it replaced the G3 (a conventional rifle still soldiering on with some reserve brigades and the Hemvärnet).

Designed by FFV-Sako Ordnance, the G4 is a bullpup binary assault rifle that was built specifically for Scandinavian demands. As a result, it is rugged and reliable, working equally well in Arctic conditions as well as the more temperate zones; it was even tested in the United Arab Republic for desert conditions and in Indochina for hot and humid environments.

The weapon fires an indigenous 7x15mm round. This round was designed to have both good ballistic performance and armor penetration. The bullet is highly pointed with a tungsten core; upon impact with flesh, it tumbles, creating a large wound cavity. To eliminate the need for carrying separate magazines and propellant bottles, FFV-Sako designed a magazine that contained the necessary propellant for 100 rounds.

Mounted under the barrel is a 30-millimeter underbarrel grenade launcher, which is closely tied to the rifle's electro-optical sighting system and laser designator to take advantage of programmable munitions. Although tailored for the Scandinavian Gr 30 series of grenades, software modifications enable the launcher to be used with foreign ordnance as well. High explosive, high-explosive dual purpose and smoke grenades are available for the weapon.

Finally, the G4 mounts an DECA Optronics S-3 electro-optical combat sight. It features a variable magnification (from 1.5x for MOUT combat to 6x for battlefield "designated marksman" role), a thermal imager and a laser rangefinder/designator. The last feature is used in concert with programmable grenades. Targeting data is displayed on either the sight's own display or broadcast directly into helmet optics. The sight is powered by a small battery in the rifle stock.

The MG4 is the general purpose machine gun of the Scandinavian Army, in service since 2289. It can be found in several different incarnations and configurations, including light machine gun (section use), medium machine gun (support platoons, with a heavier barrel and often a tripod as well), anti-aircraft machine gun (on a pintle mount), point defense weapon and even on a combat walker's shoulder mount on the Thor CW.

The LMG, MMG and AAMG versions use 200-round cassettes; the MMG and AAMG versions feature cooled heavy barrels for sustained fire but they are otherwise identical to the light machine gun. The point defense weapon uses a large (3,000-round) ammunition drum, a linkless feeding mechanism and a separate propellant container combined with an on-mount sensor. The CW version works on the same principle, but with a 1,000-round drum, a correspondingly smaller propellant container, and suitable electronics for CW use.

The PM 7 Pilen ("Arrow") is the standard man-portable ("light") anti-tank missile in use with the SUDF. They are issued to support platoons and companies in infantry battalions, and a specialized version (PM 7B) is also mounted on the Thor combat walker. A totally indigenous design, PM 7 manufactured by the Scanavia Missile Division.

Weapons and organization from the excellent Etranger site.

For vehicles I am going to go with the Chariot tracked APC (also from GZG).  I like the look and each should hold at least a half section (hoping that when I buy these they will look suitable for a squad).  It will be called the Stridsvagn.
Solid Copy by Darryl R. Smith at 20:29 5 comments: 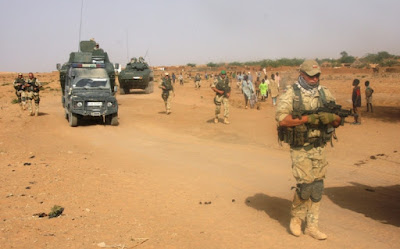 In looking at this picture of Polish troops in Chad, the overall tan effect with some splotches of what appears to be gray along with green webbing, and dark green Rosomaks, might be how I paint those nice Terrain4Games Poles I picked up a few months ago.  The pictured soldiers are wearing caps, while the miniatures are in helmets, but I can live with that difference.