We Have a Little Bird Down 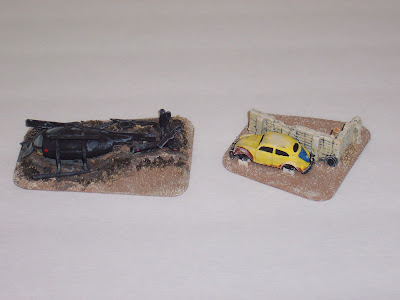 Taking advantage of the recent re-release of the old Cannon Fodder Miniatures range of 15mm by Slave 2 Gaming, sculpted by Greg Blake, I decided to get my Black Hawk Down project moving forward, but modified using a crashed MH-6 Little Bird instead of a Black Hawk,  (the former of which I conveniently have thanks to David Glenn, who created the terrain piece as part of a swap).  I've actually been thinking of using the Slave 2 Gaming rangers as part of a pseudo imaginary force, based on the Danish army.  Yeah, I know, I am goofy, but instead of going for a straight Black Hawk Down setting, why not?  While it appears that the Danes were not involved in many foreign operations beyond the Balkans during the 1990s, they have supported various UN and NATO missions since then, including in Africa.  Currently they use weapons that are the same or similar enough in 15mm to the Cannon Fodder U.S. Rangers, like the Canadian version of the M-16.

The Cannon Fodder Africans are a mix of AK-47s, RPGs, and other light weapons.  I have shanties, North African buildings, the mosque and Olympic Hotel.

We'll have to see what inspires me once the figures arrive...they are winging their way from Australia as I type!
Solid Copy by Darryl R. Smith at 15:50