With all the hoopla surrounding Black Friday an Christmas deals, I bought in a bit and picked up a few items.  From GZG I ordered just a few packs, mostly to round out or provide impetus to a couple of small projects.  I decided that I needed a few more packs of their Egyptian-like sci-fi and a pack of grunts, ala Stargate.  I have plenty of figures now for players to run a small team each.

I also had been looking at the Scandinavian Federation figures for some time...even though the picture on the website was far too small to pick up much detail.  These are older figures, being a tad shorter than more recent GZG releases, and are packaged in squads of a team leader, two support figures, and five riflemen, wearing winter garb.  The figures are nice for being some of GZG's older sculpts, and I prefer the squad option so that I do not have to order full packs of SAWs when I only need a couple.  Here is a picture of one of the packs.

I also picked up two packs of the Pan-African Union figures.  They are chunky (meaning they have some good heft) and well-animated.  They will (hopefully) go up against a South African faction from another manufacturer.  More on that when those figures arrive.

I am, as always, impressed with GZG's wide range of products, pricing, quality, and shipping.  Top notch company to work with.

More Chaco for Your Taco

Or, maybe just ordering more Chaco War figures from Khurasan!  A few reasons why...I can use the figures for any banana war, I can use the figures for the Chaco War, I want to help convince Khurasan to make the heavy weapons he promised lo these many years ago, and damn it, they are just cool.  While I had thought about using Force on Force/Ambush Alley to game some skirmish actions, I have recently ordered Nuts! from Two Hour Wargames and will give those a go.
Solid Copy by Darryl R. Smith at 12:52 1 comment:

Hot Damn - Been Waiting for These! 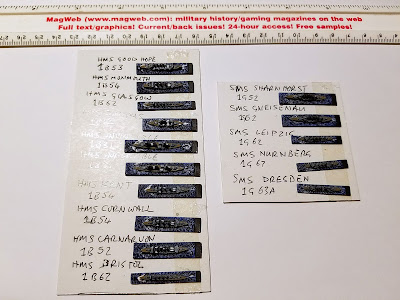 A few weeks ago Tiny Tin Troops had a post on one of the gaming sites, selling the complete and painted ships for the Battles of Coronel and Falklands, in 1/6000 scale.  I thought the pricing was very reasonable, so reached out and bought these little gems from them.  Today the ships arrived in the post, in wonderful condition, and now I cannot wait to get them on the table...once I secure a sea mat.

I really love the paint jobs, and really the small scale of the ships will be a bit more visually in scale on the tabletop.

I already had these fleets in 1/1800 from Topside Minis, which are printed ships on decal paper that one affixes to wooden bases, but when I saw painted minis for practically nothing, I had to jump on them.  Now, where DID I put that copy of General Quarters II?
Solid Copy by Darryl R. Smith at 19:49 2 comments: