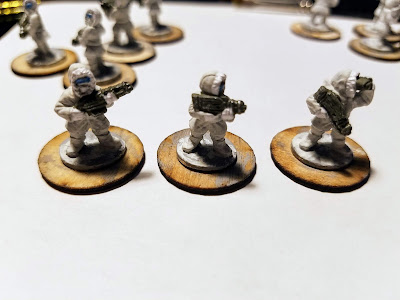 I've been picking up paints and working on my GZG Scandinavian Federation troops.  Doing a simple scheme on these since it has been quite some time since I have painted, let alone 15mm figures.  Light gray primer, off white base coat, dry brush white, white on gloves and fur around the hood, light blue on the goggle glass, grey green on the weapons and binoculars, dry brush steel on the weapons, and now looking for a white or light gray wash to complete them.  Then basing with some fine ballast and snow, along with a few tufts for some color.

Update - Worked on the bases a bit.  Fairly happy with how they turned out.  I still want to find some white or pale gray wash, then seal them with a flat varnish. 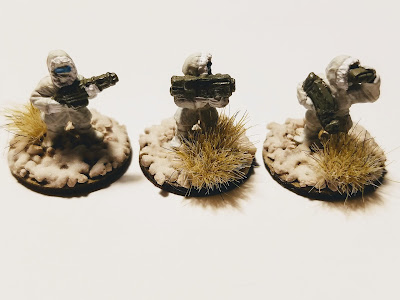 Email ThisBlogThis!Share to TwitterShare to FacebookShare to Pinterest
Mentioned in the Dispatches: Ground Zero Games, Scandinavians 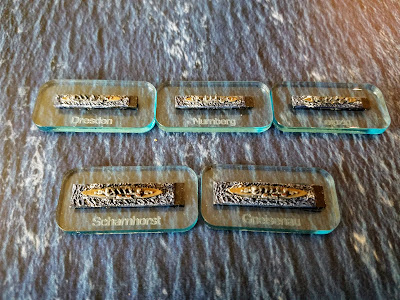 Buying a gaming mat these days leads to quite a few rabbit holes, due to the vast amount of options currently available.  Used to be one bought some felt at the local fabric store, then that permeated into buying Geohex mats, then Geohex terrain pieces, and that covered the gaming needs for a number of years.  But more recently one can buy mats on fleece or mousepad material or PVC, beautifully printed.  One could also use various sign making companies and upload an image for the company then to produce a mat printed on banner material.  Then, does one want hexes or no?  All sorts of decisions to be made.

To use with my Figurehead Great War ships, mounted on Warbases custom bases, for the Coronel and Falklands scenarios, I spent a few hours weighing options at various online retailers.  Cost would be a primary factor as I did not want to spend too much on a mat, but still wanted to have a nice looking and functional surface.  To that end I went with a PVC mat from Deep Cut Studio. 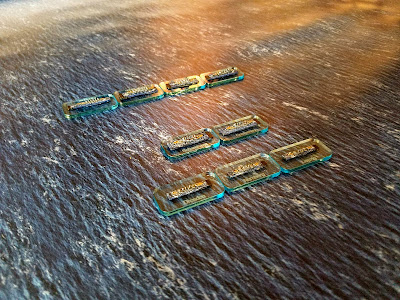 I placed my order on a Sunday afternoon (U.S. time).  The website is easy to use.  Find the mat you want, pick a material, pick a size, add to cart, and checkout with PayPal or a credit card.  My 6' by 4' mat was $72.00 which included included overseas shipping.

I received my mat on January 24th, the Friday following my order.  During the process I received updates about shipping with a FedEx tracking number.  A Sunday to Friday turnaround time is really amazingly fast from Europe to the United States!  The mat came in a long tube, which I should be able to use when the mat is being stored.

I am very happy with how the mat looks with my Warbases custom blue bases.  Now, time to determine rules and to host this game at a local shop! 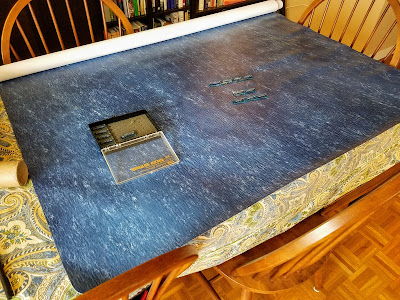 Coronel and Falklands Ships - Based and Ready 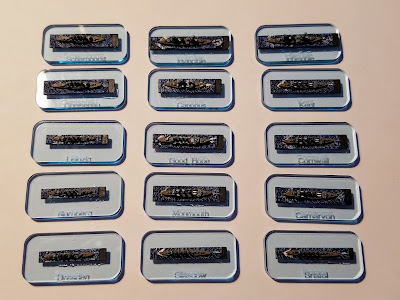 Using tacky glue I have been able to base the various ships for the Coronel and Falklands battles.  I am just waiting for my Deep Cut Studio mat to arrive to see how well these blue tinted bases from Warbases will look on the gaming table.  I am really looking forward to running some games with these little beauties! 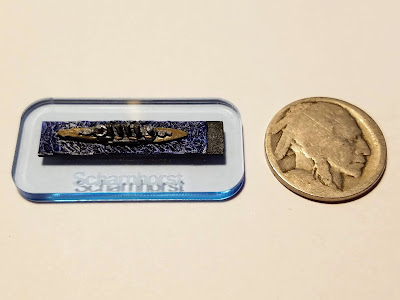 It is time to get these Figurehead ships for Coronel and the Falklands (picked up from Tiny Tin Troops) on their newly acquired bases!  I recently received my custom bases from Warbases, each base etched with the name of the ship.  Should make it easy for players to know which ship is which, while not being as intrusive as a print out of the name.  The blue color of the base will blend nicely with the gaming mat as well.

Now, next quest, to find a glue that will not cause any hazing or smoking of the base itself, just in case I get a little glue beyond the miniature itself!

And the other next quest, a nice sea mat to game on!

UPDATE - Per the suggestion of some on a gaming forum, I've tried some tacky glue on the Scharnhorst to see if it will hold decently enough for game play.  Checking it after a night of drying, the ship is firmly in place.  Thus, the basing glue conundrum has been solved. 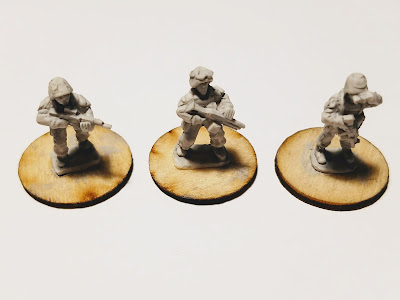 I am a hoarder when it comes to buying figures, but terrible at getting them painted.  I was much better years ago getting troops ready for the table, but my painting arrangements were more conducive then.  I decided over recent days to pick up some paints and start getting some figures painted since I am not currently working (quit my last job).  Because I live on the fifth floor of a high rise, I really cannot use spray paint to prime figures, which is really the biggest hindrance to getting figures painted.  We have an enclosed balcony, but the dust residue from spray priming has a tendency to get on the walls, so not good.

In my recent spate of purchasing paints, I picked up a bottle of AK Interactive grey brush on primer.  Expensive when compared to a can of aerosol, but again, no spray in the condo.  I decided to prime a few figures just to see how I like AK.

The primer is very thin, even after a good shaking.  But I plowed on and applied a layer to some Terrain4Games modern Poles that I have had for awhile (hoarding you know) and was happy to see that the primer covered these resin figures fairly well.  Drying time is supposed to be 24 hours, so I will see how they look tomorrow, but thus far they seem to be drying nicely, meaning that the details on the figures are starting to pop.  The figures were cast in three, no make that four, different batches of resin, but the primer has made them all an even shade of light gray (or grey as it were).  So far, so good.

I tried to brush on the primer to the resin vehicles I have, but coverage over larger and flat surfaces doesn't seem to be this primer's forte.  I will have to try another solution for brush priming my vehicles it seems.

Next day update:  The figures dried nicely, and the primer covered very well while leaving the details to shine.  At the very least, while brush priming is a slow pain in the arse, at least I have a primer I can use to start getting figures painted!
Solid Copy by Darryl R. Smith at 10:49 No comments: 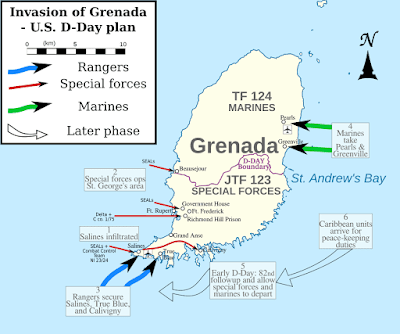 The love/hate affair with Grenada continues....

Back to this oft-considered gaming project.  I have five buildings from Empires at War mostly assembled, but overall not as happy with them as I had hoped I would be.  There are a few steps in the building instructions missing which caused a bit of a headache, and the foot-space in the buildings will barely hold an individually based 15mm figure (using a 20mm base).  But. they are more affordable than most, and come pre-painted, so there you go!

I have ordered some figures, in this case the Khurasan Vietnam offerings to use as Marines.  For Rangers I will probably have to go with Irregular Miniatures modern US infantry wearing the soft cap.  For bad guys I have a few options - African military and militias from Peter Pig (but they might be small compared to Khurasan), or perhaps some Cold War Russians from Khurasan for the PRA.  The latter are probably a bit too well equipped, but I need figures with helmets and they would be sized more in line with the Khurasan Vietnam figures.  Cubans are covered by the hardened militia by Peter Pig.  Still some considerations to be given to various figures.

A suggestion on one of the gaming sites yielded a nice tutorial on painting woodland camo using Vallejo paints.

Hmmm, now I am also considering this in 10mm.  Miniature Figurines make a large line of 12mm, which would cover the PRA in helmets, US infantry in the Fritz helmet, and African insurgents which could represent the militia.  They have vehicles like the BTR-60, an these might scale better with the Empires at War buildings.  Sheesh, I cannot make a decision!
Solid Copy by Darryl R. Smith at 09:58 2 comments: