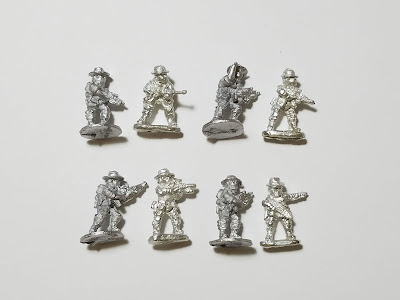 At first I was thinking about a project that involved a sci-fi setting similar to South Africa in the 1980s, pitting mostly black forces against mostly white.  In this case however I am going to add in a more threatening alien presence which will force the swart and wit to work cautiously together.

Brigade Models - South African Confederation - I purchased two packs (code SF15-660) from Brigade (nice models, great service).  Each pack has two five-man fireteams each consisting of a squad leader, three riflemen and a support weapon.   There are no repeat sculpts, meaning all ten figures are unique.  A good number of wit to combat whatever is thrown their way.

Ground Zero Games - Pan-African Union special forces infantry - I also grabbed two packs from GZG, codes P23 and P23 (as always, GZG figures are top notch, and Jon provides incredible service).  Both packs have eight figures each, which break down to two fireteams each with three riflemen and one SAW.  There are two of each pose in each pack.  Plenty of swart to tackle the latest alien threat.

The two ranges are fairly close in compatibility, with the GZG figures being a tad taller and a smidgen heftier, but not by much.  In comparing weapons and equipment the ranges match very well.

Aliens - I have all sorts already collected.  Could be the little froggies from Zombiesmith (Aphids), the nomads from Micropanzer, or several other factions/companies I own.  I like the thought of the nomads as they are not nearly as far fetched as the Aphids.
Solid Copy by Darryl R. Smith at 19:19 No comments:

Recently I have been giving some thought to doing more Vietnam air gaming, using Check Your 6!  I have some nicely painted 1/285th Raiden aircraft (painted by Kevin Hammond at Miscellaneous Miniatures...damn fine work he does), for a few scenarios from Crusaders Over 'Nam, but I recently picked up Tonkin Gulf Yacht Club, which adds a slew of opportunities for gaming with a variety of aircraft.  However, a slew of opportunities means a slew of aircraft to purchase and while 1/285th fighter aircraft are around $3.00 to $4.00 each, needing larger bombers and such precludes a deep dive into trying to purchase and have painted all the aircraft needed for both scenario books.  A possible solution is diving down to a smaller scale of aircraft (see what I did there?).

There are two companies making 1/600th scale aircraft in metal that I know of, those being Tumbling Dice and Osmial Osmy (Pico Armor in the United States).  The former seems to offer more modern aircraft, but apparently have some issues in scaling and looking a bit more "cartoonish."  The latter do not offer quite all the aircraft needed, but apparently are more to scale and more realistic in appearance.  Check this blog post from sixtwentyeight to see some excellent comparison pictures.

Detailing on this size of aircraft in terms of painting and details offers a perhaps more simplistic approach.  That is not to say I have not seen some amazing work in this scale, but some of the detailing (gun panels on F-86s for example) is not as necessary to paint.

I might have to place a small order with Pico to see if the quality of the planes, and the assembly of same, are both within my expectations.  And then i also need to see if I can have them painted!
Solid Copy by Darryl R. Smith at 18:37 2 comments: 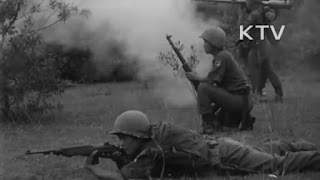 Yep, thinking once again about something not in the gaming mainstream for another project.  The ROK forces that served during the Vietnam War were tough fighters, respected by their American counterparts, and also prone to bursts of violence against the Vietnamese population.  The latter aside, I've been looking at figure options for South Koreans.  There is no one line in any size/scale that I can find that makes a Vietnam range for South Koreans, but that really isn't a huge concern as one can use Americans from Korea or even World War II as really close proxies for the first two years of the ROK presence in Vietnam.  What does become the issue is finding a range of figures that match up weapon-wise with other ranges I own (Flashpoint/Flames of War/Khurasan) but height wise are shorter than Americans.  I love the look of Eureka's US Marines, but not sure if they would be too tall compared to the aforementioned ranges.

All this comes about (again) because I am reading The Village for about the sixth time, plus being active on the reborn Fields of Fire forum.
Solid Copy by Darryl R. Smith at 12:18 No comments:

Email ThisBlogThis!Share to TwitterShare to FacebookShare to Pinterest
Mentioned in the Dispatches: Fields of Fire, Flames of War, Flashpoint Miniatures, Khurasan Miniatures, ROK, The Village, Vietnam

I finally received my Forged in Battle Polish Black Brigade yesterday.  Forged in Battle did a great job in communicating to me early on about their limited ability to ship, and even asked if I wanted to cancel the order due to the delay.  I definitely wanted the figures, so after nearly two months from my initial order I now have a platoon of Poles.

The figures are very well done.  Crisp castings, little flash, nicely proportioned and animated.  They are 14M on the Barrett Scale which makes them a little closer to old school 15mm than the creep towards 18mm..  And while I know that most of the line troops of the Black Brigade did not wear the long black coats, I am still going to paint them as such, because it looks cool!

I picked up the Skirmish Campaigns scenario book on the Black Brigade from Brigade Games.  I doubt if I will use any of the scenarios as written as they often call for AT guns or tanks, and I do not want to delve that deeply into the period.  I plan on a platoon of Germans, and that will give me games for four to six players as I will most likely use Nuts! for the rules, and a squad for each player is plenty.  I have some buildings from Novus that will work nicely for rural Poland.  I might pick up a tankette or a German light tank as well.  Small project, easy to knock out!
Solid Copy by Darryl R. Smith at 21:13 No comments:

Fields of Fire: Reloaded Forum is Back 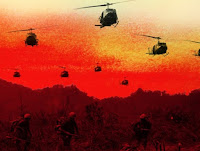 Finally, after a lengthy hiatus, the Fields of Fire forum has returned.  A long time Vietnam posting board, it is filled with some of the most helpful gamers out there.  All things 'Nam all covered, including the French period.

If you have an interest in Vietnam from a gaming point of view, stop by!
Solid Copy by Darryl R. Smith at 06:36 1 comment: